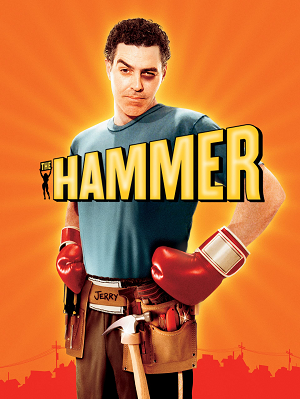 Jerry: They say you should never let go of your dreams. But if your dream is to be a Mouseketeer, and you're 45, you may want to let that one go. On the other hand, if your dream is to be a Wal-Mart greeter, you can hang on to that baby until like a year after you die. Me? I don't even know what my dream is, but it's all right. I've got time. I won't be turning 40 for another—
*alarm clock goes off*
Advertisement:
Jerry: Ugh... I just turned 40.

The Hammer is a 2007 comedy written by and starring Adam Carolla. Carolla stars as Jerry Ferro, a very quick-witted Deadpan Snarker who hasn't done one whole hell of a lot with his forty years so far. When he and his buddy Ozzie get themselves fired from their jobs as carpenters, Jerry heads to the gym where he teaches boxing lessons to take out his frustrations in the ring. After Jerry shoots his mouth off and gets into an unwanted sparring match, a wizened old coach named Eddie takes notice of his hard-hitting left hook (which, despite his former trade, is what really earned him the nickname "The Hammer" during his younger days as a Golden Gloves boxer) and offers him the chance to compete for a shot on the U.S. Olympic Boxing team. All told, it's a pretty good success story in the making.

Too bad for Jerry, not all has been told: Coach Eddie is actually using Jerry as a means of getting some free training for his favored contender, a grumpy but talented up-and-comer named Robert who butts heads with Jerry while preparing for his shot at the gold. Jerry, however, is having none of that, and decides that he's taking his shot, too. Along the way, he gets support from his buddy Ozzie and from his new love interest Lindsey, a good-hearted public defender and one of Jerry's students at the gym. With their help, he's going for one last chance at greatness.

The movie sort of came and went in its limited theatrical run, but it's found a small but loyal fanbase thanks to its abundance of great, snappy dialogue and humor that, unusually for an R-rated comedy these days, doesn't rely too heavily on Black Comedy or dangling onscreen penises to get its laughs.