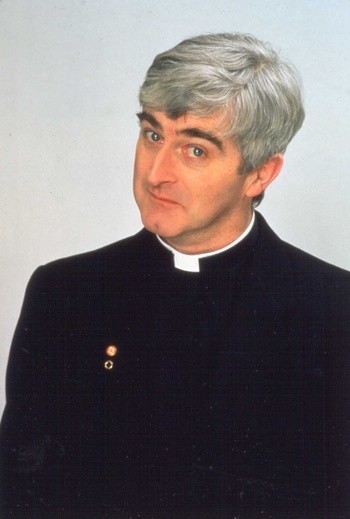 "It doesn't at first glance look like a winner, but people like the characters. If you want the audience to stick with you, you have to have attractive characters."
On Father Ted
Advertisement:

He began making a name for himself in Ireland performing in satirical and subversive comedy on radio and TV, usually as part of an ensemble or in a supporting role. Although his talents were recognized near-universally, he had difficulty finding consistent success.

His attempts at establishing a solo career were lackluster. Although he was brimming with brilliant ideas, he struggled to develop his concepts into usable scripts and was further hampered by a dislike of editing and polishing. Because this resulted in him turning in sub-standard work, projects would be cancelled before they aired or control would be taken away from himnote In one notable instance, he had a deal to produce a solo sketch show for RTÉ and shot an entire series' worth of footage. However, the results weren't working, so editors took over and salvaged what they could to create a single one-off special.

Morgan finally found success and acclaim playing the title role in Father Ted. As Ted, he brought depth and pathos to a show that was, by design, a caricature of rural Ireland and the Catholic Church. Now that he was visible to a wider audience, doors were finally beginning to open for him and people were eager to see what he'd do next. Unfortunately, he suffered a fatal heart attack almost immediately after filming the finale for Father Ted.