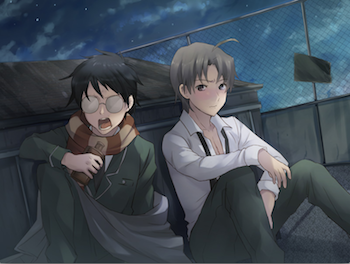 "This is a manly picnic. No glasses. No napkins. Whiskey only."

Hanako follows me through the still-crowded halls to the library, using me as a shield. As soon as we are through the door, Hanako bolts for the counter, where Yuuko is stacking books. Before I can catch up, Hanako has whispered something to her.
Yuuko: "Um, you'd find that in non-fiction, but I don't know where, exactly. If you want I can look it up..."
Hanako: "N-never mind."
Hisao: "Hey Yuuko, what's all this about?"
Yuuko: "Oh, Hisao... Hanako was just looking for a book on..."
Hanako: "N-nothing..."
Hisao: "A book on nothing? In the non-fiction section?"
Hanako: "I... I was just..."
I shoot a glance at Yuuko. She looks like she's about to burst from the pressure of keeping Hanako's request secret.
Hisao: "Yuuko, what did..."
Yuuko: "Chess! She's looking for a chess book!"
I make a mental note to never entrust Yuuko with any important information.