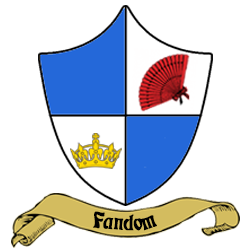 Quarterly argent and azure, in the second quarter a fan gules, in the third quarter a crown or
The Knights of Fandom

They started as essentially an Ascended Meme; it's all the fault of Lady Norbert's Tumblr followers. In autumn 2012, a group of them decided to call her the "Empress of Fandom." She jokingly responded by drafting the Knights' code of conduct, which went unexpectedly viral; it stopped being a joke and became an actual online movement when she realized there was a need for such a thing. Now boasting over 200 active members, they espouse the joint purposes of getting excited about things they love and stopping cyberbullies in their tracks.

Because Tumblr permits anonymous messaging between parties, there has been something of an epidemic of people hiding behind this anonymity to send hate-filled messages to others. The Knights of Fandom not only pledge to never do this to anyone themselves, they also consider it their duty to reduce the suffering caused by those who do. Sometimes they involve themselves, as they see fit, in related crusades both on and off of Tumblr, harnessing the power of their own creativity to make the world a better place.

As of April 2016, the Knighthood has officially begun to mobilize offline as well as on, and conduct anti-bullying panels at conventions. The momentum is gathering slowly, but the reception by con-goers has been very positive.

The Knights of Fandom exhibit the following: