open/close all folders
Vero Espenson/Alice Winthrop/Kuro Lengile/Lucia Anahera/Ari Allaway/Decibel (No Last Name Given)
The player character, who arrives in Reborn City on a train and narrowly avoids being killed in a terrorist attack. After receiving their first Pokemon from Ame, they set out to defeat the Reborn League while, by a series of coincidences, getting themselves involved in the conflict with Team Meteor.

Unlike other Pokemon games, you have two appearances for each gender available at creation, as well the option to play a gender-neutral character. The males are Vero and Kuro, the females are Alice and Lucia, and the non-binaries are Ari and Decibel.

Really, what was she expecting? (after losing a fight with you)
Not only are you not a Glaceon, you are the singular last thing I wanted to see when opening that door.
Glass breaks and you appear yet again. Just like my nightmares. […] The nightmare thing was a joke, just by the way. Mostly.
Gym Leaders

"Kaaaaaaaa... BOOOOOOM!!!"
Electric Gym Leader of the Peridot Ward and former cheer captain of the trainer school. Her gym is also Reborn City's main power plant. Used to hang out with Florinia, Amaria, and Titania in high school.

"I might wish you 'Good luck,' however 'luck' is merely an illusory essentialization of statistics, and is not inherently good or bad in any way."
Grass Leader of the Onyx Ward and Head Instructor/former student of the trainer's school, which also functions as her gym.

"Hope is weakness. It's an illusion meant to sugarcoat this sickening reality."
Poison Leader of the Beryl Ward and father of Heather. Known to shut himself in his room for days at a time. Also a high-ranking Team Meteor Admin, who eventually kills himself over the loss of his daughter, and possibly his outing of being a Meteor Admin.

"I know this pain it feels... It's lonely..."
The Bug-type Leader of the Lapis Ward. She runs her gym in the Ward's library, and is the little sister of Bugsy.

The enigmatic Ghost-type Leader of the Abandoned Power Plant close to the Beryl Ward. He's...unusual.

"We mustn't let our inner turmoil complicate outside affairs."
The Fighting Leader of Apophyll Academy and mentor to Victoria. And also a sufferer of an unknown illness that will eventually claim her life.
Despite surviving a "family" that communicated mainly in drugs and violence -

"Within reflections and crystal imperfections, there's art. It's something I could never hope to live up to again."
Ice Leader of Spinel Town who used to be a famous model, but gave up her career in favor of taking care of her son, Bennett.
Serra: And what about you? Aren’t you upset over losing her? Over both of them?!
Radomus: Of course I am. But for better or worse, I am a veteran when it comes to losing “hers”. One might say I’ve been bearing an awful lot of wounds through some mean times. Another might say we very often tell others the advice we ourselves need to hear.

"Nomos and Nostra are just dolls, but... hi. Um... Nomos says 'Hi,' too."
A patient of Dr Connal as well as the Normal Leader, and Anna's brother. Has a Cleffa doll called Nomos. Unlike his sister, he doesn't think it's alive.

"Wrong is sometimes right. In is often out. And sometimes up may be the only way down."
A peculiar but gentlemanly Psychic-type Gym Leader who lives in the Vanhanen Castle on Route 1, with his Gardevoir sidekick and his adopted daughter, Luna.

"Darkness is love. There's nothing to fear."
Initially appearing to be a maidservant in Radomus' castle, Luna is in fact the Dark-type Gym Leader, with her gym being located in Iolia Valley.
I am perfectly fine; there is no need to worry about me. I am just very - happy. I am happy to have you both back.

"Awesome kind of runs in our family. No big deal."
Initially one of Dr Connal's patients at the orphanage, this snarky delinquent is the latest in her family to be the Fire-type Gym Leader of Calcenon City once she manages to escape.

"I AM TERRA, HEAR ME RAWWWWRRRR!!!!!"
Ever the clown, Terra is the Ground-type Gym Leader, one of three at the Agate Circus.

A pleasure to meet you, darling!
An acrobat and the Flying-type Gym Leader, one of three at the Agate Circus.

"I'm not going to stand for anybody who treats their Pokemon badly."
The Fairy-type Gym Leader, who's gym is located in the Coral Ward. Xey were indirectly responsible for the Reborn Gates being shut for almost a decade, as they were frozen in time.

"This is already over. There's no need for your shining armor here."
The tough as nails and scary as hell Steel-type Gym Leader, whose gym is located in the Tourmaline Desert.

"I have everything a girl could possibly want... Status, a good education, the love of my life... So... why does everything feel so grey?"
The sweet and bubbly (at first) Water-type Gym Leader located at the Fiore Mansion atop the Ametrine Mountain. She lives with Titania.

"Chin up. You're gonna rock this fight, aye?"
The Rockstar and Rock-type Gym Leader of Agate City. 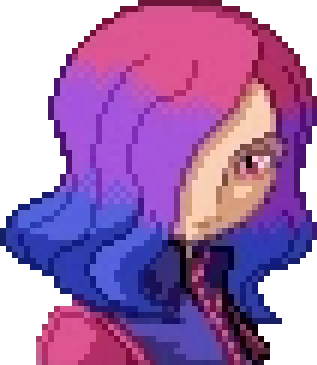 Revenge is a dish best served...now.
The cold, ruthless Dragon-type Gym Leader of Labrador City, and the last Gym Leader in the Reborn League.

Grass-type Elite Four member, former resident of the Orphanage, and sister of Charlotte and Saphira.

"What kind of father doesn't let his daughter go out to beat up bad guys?!"

Corey's adventurous daughter, who's much more lively than her father.

"Prosperitas, Pax Pacis, Obseqium. Blessings of the Lord Arceus upon your house."

A priest who claims to be Luna's biological father. He also has met Solaris.

"Something about how little insects can go from what they are to something so much more is just so exciting!"

Ice gym leader Serra's son, and initially, a prospective Bug-type Gym Leader, who decided to try for greater heights when El said he could make it into the Elite Four with his determination.
Bennett: The only thing that’s been tested is your willingness to indulge.
Zel: I’m -I’m sorry, I don’t understand…
Bennett: You’ve just been enjoying puppeting them around as an outlet for your frustrations with them.
Zel: That’s-
Bennett: Nothing is gained by battling now when we’ll just put them to rest anyway.
Zel: But you said—
Bennett: I said to actually do something; not to waste time and jeopardize the PULSE’s security in a 1-vs-2 scenario. I will take responsibility for the battle with Luna, but this fight served no purpose than to stroke your own ego.
Zel: I just wanted to make sure they were fully under control…
Bennett: You wanted to feel that control. I assume because you’ve lacked autonomy over your own body for so long. Am I wrong?
Zel: …
Bennett: And I read your file. You were just a grunt before joining with those girls, correct? Not an effective one either. They were your only chance to stand out, which is why you cling to them even now. The kind of behavior you’ve demonstrated today exemplifies your incompetence. You let your emotions get in the way of your outcome. Until you learn to set ambitions aside and truly focus on your self and your goals, you will never change.
Rivals

"As soon as I heard, I had to go see if I could help! I'd stay and talk more, but I have to hurry!"
The apprentice of Kiki, who starts the Reborn League at the same time as the player and becomes their rival.

"Heyyyy, you're cute. What? Haha, no, I didn't say anything!"
One of the player's rivals. Cain is a somewhat effiminate young lad who tries to help out whenever he can.

"Later, loser!"
The player's other, other rival. Even in the world of Reborn, he stands out for being just so...unpleasant.
Reserve Gym Leaders

"I'd be better off if everyone just left me alone..."

Cain's sister and the Poison Reserve Gym Leader, setting up shop in her home at in the Byxbysion Wasteland.

"Ready to take me on, pipsqueak?"

The Reserve Fighting Gym Leader, and a strongman at the Agate Circus.
I learned from getting back at my old man that getting even doesn’t make anything better. But I can’t shake this anger. It’s quiet by now, but it’s there. It doesn’t leave, no matter what I take it out on. I can barely breathe, like a vat of lava being poured down my throat. Fire in my fucking bloodstream, eventually it just settles into stone. A weight in my core. Hard to walk. Hard to think. And I’m sure it’s not half as bad as whatever’s happened to Ciel.

Original Poison Reserve Leader before running away from home and leaving his Pokémon with his sister. See Rivals for more information.

Two Grunts who frequently team up against you.

The apparent boss of Team Meteor, who even the Admins answer to.

The true leader of Team Meteor.

A pair of Meteor Grunts.

Heather's guardian, Cal's brother and a member of Team Meteor.

Pokémon bound by PULSE machines, which simultaneously enslave the Pokémon and amplify its powers to exorbitant levels. Team Meteor uses them as effective weapons of mass destruction and for other amplified utility purposes.
Other

Manager of the Reborn League, who gives you your first Pokémon.

A psychologist known for his controversial use of shock therapy. Also runs his own Orphanage of Fear.

"If two stars fall, passing like ships in the night, do you think they would wish upon each other?"

A patient of Dr. Connal's Orphanage of Fear, Noel's sister, and apparently a very high-ranking trainer despite her youth.

"I guess I have a habit of not really being what people want me to be."

Former Fire-type gym leader, he retired to find himself and became Kiki's top apprentice at her academy. Is actually a part of Team Meteor; after he indirectly helps kill Kiki, he is horrified enough to leave and become a rogue agent.

The reporter of Pokemon Reborn, responsible for several different TV channels, and the partner/main Pokemon of Psychic gym leader Radomus.

An old woman in the Lapis Ward, who is a target of both the Magma and Aqua gangs.

The leader of the Agate Circus, who inherited the position from her father.

The leader of the Magma Gang, archrivals of the Aqua Gang.

The leader of the Aqua Gang, and opponent of the Magma Gang.

The DJ and spokesperson of the Reborn Nightclub, a very exclusive area where the best way to get in (not only) is to defeat the Elite Four.

A mysterious voice, who appears offscreen when you leave the Citae D’astra after the encounter with Elias, and later in the void. Another voice, implied to be a different character, appears at the end of Episode 18.

The current head of the Hardcore League, a harder version of the Reborn League for select trainers. He technically existed in the base game, but he was a one-off early-game trainer; he's pretty much a different character here.

The former Gym helper in the Reborn League, until Ame replaced him with the telecom system. He now works for the Hardcore league, letting you shift the leader's teams between Single Battles and Double Battles.

The original head of the Hardcore League.