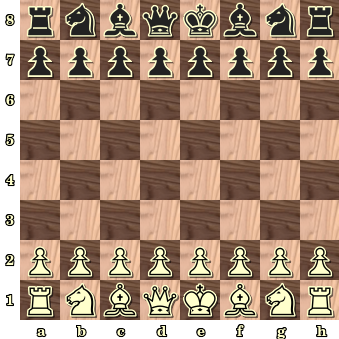 The starting position. The letters and numbers label the board squares in algebraic notation.
This page reviews the basic rules of chess and enough terminology to discuss the tropes associated with the game.

Chess is played on a checkered board with 64 squares in an 8-by-8 arrangement. The initial setup is literally a Mirror Match; Black's set up is the reverse of White's, so that the respective Kings and Queens appear to be facing one another. (The simple mnemonic is that the Queen is fashionable and "her dress matches her shoes," meaning she should always start on a square of her own color.) Another mnemonic is that Dames are set up on D squares (algebraic notation). The board is orientated so that both players have a white square at the bottom right of the board from their perspective ("white on the right")—getting this wrong indicates a complete beginner in Real Life and a Critical Research Failure in fiction (unless depicting complete beginners).

The Pieces and How They Move.

All pieces in chess move in straight lines for one or more squares (yes, even the knight — see below). The pieces that can move more than one square cannot move through squares occupied by allied pieces and cannot move beyond the squares occupied by enemy pieces. If an enemy piece blocks a line of movement it can be captured — to do so, remove the piece from the board and replace it with the capturing piece. 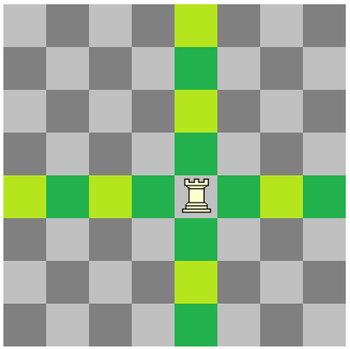 Setup in the corners of the board and shaped like castle towers in most sets. Originally, they represented war chariots or siege towers. They move along ordinal lines — that is forwards, backwards, left, and right. In the illustration, the squares the rook can move to are in green. 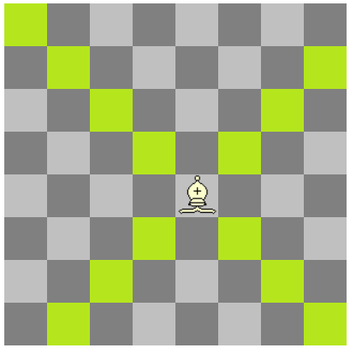 Two per player. Have a top shaped like a bishop's miter. They originally represented war elephants, but such were unknown in Europe (Hannibal Barca notwithstanding) and the imagery eventually aligned to the environment. Can move any number of squares diagonally. In the diagram to the left, these squares are highlighted in green. A consequence of the bishop's move style is it can only ever see half the board — that is, a bishop that starts on a light square will remain on light squares for the whole game. As a result, players often refer to them as their "light square" or "dark square" bishop.

In French, they're called fou (the fool, or jester). In German, they're Läufer and in Dutch, they're loper (both meaning runner). In Italian, Alfieri (Flag bearers). And in Russian, slon (elephant). In Finnish, lähetti (messenger/courier). Go figure. On the other hand, in Spanish, they're called "alfil" (derived from Arabic, derived in turn from old Persian "pil", meaning "elephant"). In Hebrew, they're called "ratz" (runner/messenger), similar to the German, Dutch, and Finnish versions (which is understandable, seeing as most of the early Israelis were German-born). In Croatian, they are called "lovac" (the hunter). In Romanian, they are called "nebun" (the madman) for some reason. 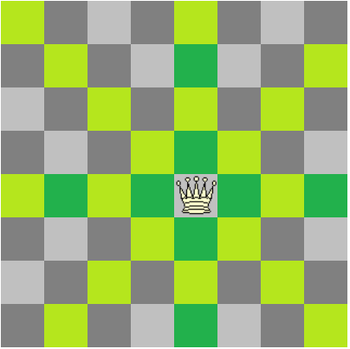 One per player. Usually the second-largest piece, and tends to have a small knob on its coronet-shaped top. Can move any number of squares left, right, forwards, backwards, or diagonally, thus combining the powers of rook and bishop. The queen in the illustration on the left can move to any green square. 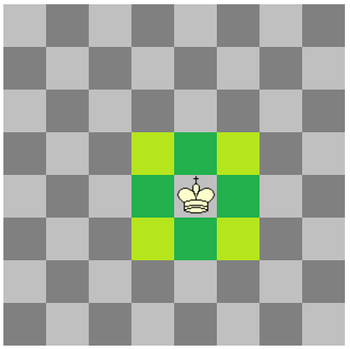 The King is the heart of the player's force. If he is ever in "check," a position in which he can be captured on the next turn, his player must take action to protect their King; it is literally against the rules to leave the King in check. They must either move the King out of the line of fire, interpose another piece between King and attacker, or capture the attacker. The King is also not allowed to move into or through check.

Traditionally the tallest piece, with a cross on top. Moves like the queen, but only one square at a time. The king, along with the rook, can be moved together in a move known as castling. To castle, move the king two squares toward the rook instead of the normal one, then place the rook on the square the king skipped over. To be eligible to castle, both king and rook cannot have moved yet. Also, the king cannot be in check, cannot move through check, and cannot end in check. 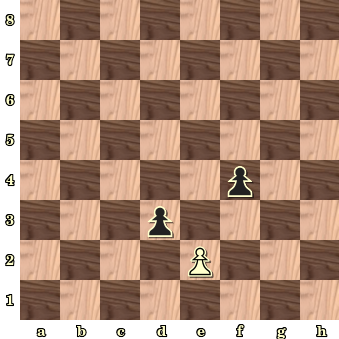 Representing infantry, each player starts with eight of these, filling the entire second row forward from each side. They move one square forward at a time, except for an optional two squares when moved for the first time.

Unlike all other pieces, a pawn does not capture the same way it moves. When capturing, a pawn moves diagonally forward one square. If a pawn moves two squares, skipping over a square that an enemy pawn could have captured it on, then on the next move, the opponent may choose to capture it 'en passant.' The pawn to be captured is moved back to the square it skipped and then is captured on that square.

Beginning players tend to write pawns off as useless and obstructive, but players of skill know they are one of the most critical parts of the game. If a pawn makes it all the way to the farthest row on the board, they're instantly upgraded into any other piece of their player's choosing apart from the king, usually a Queen. note Pawns' ability to become Queens is not their only strength — they are highly effective defenses as well, as the other player is very unlikely to sacrifice another piece to take one, almost regardless of context. 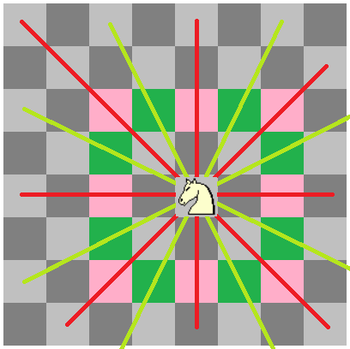 Two per player. The horses; probably the most recognized board game piece in the world. Represent armored cavalry. The knight moves to an opposite colored square from the one it's on that is at exactly two squares away, ignoring any pieces in the way, highlighted in dark green in the illustration to the left.

The illustration also compares the movement of the knight (green lines) to the queen (red lines). A queen moves ordinally (North, South, East, or West) or diagonally (Northeast, Southeast, Southwest, Northwest). The knight moves along the lines between these, known as wind lines on a compass rose (North-Northeast, East-Northeast, etc.). Since these lines do not pass through the center point of the squares adjacent to the knight it moves to the first available square along the line.

Note that the knight is sitting on a light square, and he can move to any of the eight dark squares that lie two squares away. A queen sitting on his square can move to the other eight squares in this ring (highlighted in red).

Players alternate turns with white always having the first move. The object of the game is to put trap the enemy king such that he will be captured no matter what move is played — this is known as "checkmate". The game also end with a victory if a player gives up or "resigns". Most games between advanced players end this way.

The game ends in a draw if