Literature / The Armadillo with No Heart 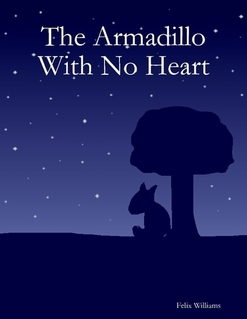 The Armadillo with No Heart is a fantasy novel written by troper Bluethorn under the pen name Felix Williams and published in 2017. Set in a World of Funny Animals, the novel tells the story of a young anthropomorphic armadillo named Kuro (the titular "Armadillo with No Heart"), residing in the peaceful seaside village of Greentown, which is populated entirely by his race, the Dillos.

Unfortunately for Kuro, he is not like other Dillos. He was born with an unusual cross-shaped birthmark on his chest, and because of the mark, he has grown up with the burden of being destined for sacrifice on his sixteenth birthday, as his fellow armadillos believe him to be tied to an old prophecy foretelling the birth of an armadillo with a cross-shaped mark and the downfall of their race if he is left alive.

Shortly before the date arrives, however, Kuro decides to run away. From there on, the story focuses on both the dangers he faces as he comes into contact with the outside world for the first time and his emotional struggles caused by the rejection he has faced over the years, as well as his need for acceptance. Along the way, he makes some unusual friends and learns that the world is much larger than the town he has known all his life.

The story can be found on Wattpad here

The Armadillo with No Heart contains examples of: