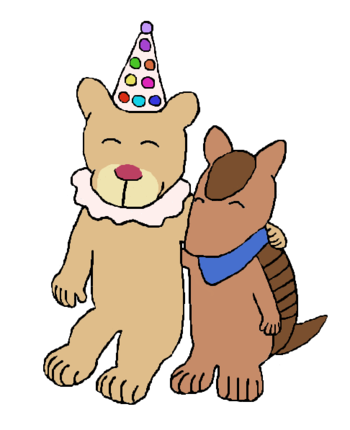 DrNoPuma and me as a puma and an armadillo.
Advertisement:

I first came across this site back in 2009, but it was a bit messy back then and I lost interest a few months later. After being away for years, I slowly got back into reading the articles sometime in late 2015, but I didn't officially become a troper until January 21st, 2018.

I'm interested in video games and would love to make one myself someday. I also have some interest in writing and completed a short novel in 2013, The Armadillo with No Heart.

Here on the wiki, you'll mostly see me on the Forum Games board, but I'm pretty quiet for the most part. There isn't much I can contribute to the articles right now, but I probably will as future things that interest me are released.

DrNoPuma, the three characters that best describe me are Yooka, 9-Volt, and Koops. Puma has also chosen the Shipwreck Creek theme

from Yooka-Laylee as my Leitmotif. :D

I'm currently participating in several forum roleplays (listed below), and I'm having a lot of fun with all of them!

I have a DeviantArt

, though my art isn't very good yet.

I'm still planning to add a lot more stuff to this list. :P

That didn't give a very flattering impression of me, did it?

A list of characters I'm playing or have played as in the Forum Games here. I also borrowed this idea from Puma, since he has a similar list on his page. :P

An idea I borrowed from DrNoPuma and Revaryk. I still update this occasionally, but I can't promise I'll be able to pick a leitmotif for everyone.