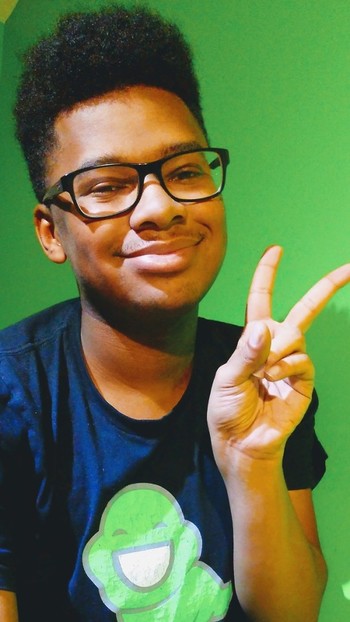 The limbly wonder, ft. the windy thing.
"If it ain't got a gear, it ain't worth a tear."
—Baisteach

Hi, I'm Tre. This is my page, but you already knew that.

I'm twenty-three, black, a writer and DJ/electronic music producer, male enough (he/his and they/them pronouns are both fine), a technology junkie, a purveyor of platformers, and a pop culture aficionado. (Also a robot. Don’t tell anyone.)

I write about music and other things that strike the Trevor fancy, and there's a couple of other fun things on there too like comics and maybe the occasional personal update. Taking a visit or sharing my work there is an easy way to make me very happy. 💚

I recently started contributing articles to the website Game Rant as a freelance news writer. You can check those out here.

My musical alias is Trevor Whatevr. I’ve independently released six EPs, three albums, and a film soundtrack. For three years I also hosted an electronic music show on WRFL-FM called Whatevr Works. I read fortune cookies on air and played some of my favorite tunes. A good gig if I’d ever say so. My other show on the station, The Heavyset, is still going strong, with my bud Cas9 and I producing it remotely. You can check out past episodes here

, and new ones air on Friday/Saturdays at 12a Eastern Time on WRFL.fm

I use Tumblr a lot — my blog on there, Trespeak,

is a font of memes and nonsense that's essentially the online equivalent to my messy room. I also run Unzipped

, a second haven for even more memes (and occasional serious matters).

I had a novel series in the works, but at this point in time it's kind of dead (though I'm not ruling out the possibility of coming back to it). Since then I've written some short stories in related universes.

I've been on TVT for a decade and some change. I joined in March 2010 at a ripe thirteen years old as Trerox, and dropped the "rox" not long afterward in a rare display of keen foresight. Since then I've left, come back, mellowed out considerably and generally, y'know, grown up, though some things about me — including the media obsession that brought me here in the first place — haven't changed much at all. These days I spend most of my time on the forums, largely at Forum Games and Yack Fest, because they’re fun places with cool folks.

I’m one of the four cohosts on a Twitch channel

called Shapes and Forms, usually alongside my buddy planet Jane and our friends Sredni Vashtar and Wynne. It usually happens on Thursday nights, but we're just doing it as a bit of a hobby so the schedule can move it around on occasion — the best place to figure out when we're doing stuff is Jane's Twitter.

I also run a Discord server named In Search Of..., where my real-life friends and internet buds have converged into a neat little community. Shoot me a PM if you'd like an invite. One project that grew out of ISO is Scribbles, a digital zine with art, literature, comics, and ephemera created by members of the server and friends. You can find it on our page at Itch.

Oh, and also: weird, odd and brilliant stuff on the edges of the zeitgeist is the kind of media I live for. Indie games, comics and music make up a big chunk of what I consider my favorite things, along with little-known cartoons.

Alright, I think that’s it. Drop me a line!

(because I felt like I needed to have a separate section for this! no particular order, just compiling a list here — a list that is probably doomed to be perpetually incomplete, but a list nonetheless)

Tropes about my music have been moved to Trevor Whatevr.