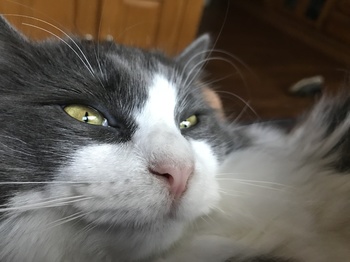 One of my cats, Luna
Hello, My name is Tabby Girl 4, you can just call me Tabby or Tabs for short. I'm Active user on the forums and you can find me in Forum Games and maybe Yack Fest. I normally go on this site when I'm bored or have weird ideas.I'm a sophomore who just procrastinates a lot and don't have a lot of IRL Friends due everything changing when Middle School came around and aren’t very interested about the things I'm passionate about; Some people drop by to say hi and that my art is great.I also do have a lot of original characters with their own stories and quirks. I have both a surreal sense of humor which is why shitposting is usual hobby of mine.
Advertisement:

I have High Functioning Autism and I own two kitties named Stella & Luna.

You can find me on these sites:

Advertisement:
Tropes About Me
Threads/Forum Games I Started
Roleplay Characters
Tabby, my Author Avatar who is a frequent nominator who is a mage. Tabby, unlike her HGS incarnation, is a Plucky Girl who frequently drops a joke or two and is a skilled ax-wielding warrior as well.
Favorite Works:

Works that I'm not interested in anymore that I can still talk to you about.

Works that this troper plans to create
Advertisement: