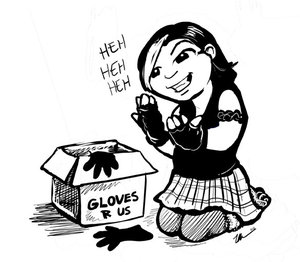 Basically, a pair of gloves with their fingers cut off at varying lengths. The standard is cutting the glove at the second knuckle, but sometimes the entire finger of the glove is removed. Sometimes called half-gloves. On occasion, only a certain number of fingers will be cut.

On a practical note, fingerless gloves combine the full tactile sensitivity of bare fingers with warmth and protection for the rest of the hand. As such they are common in cycling, sailing, and many other activities. Some people find they allow typing while reducing painful symptoms of arthritis, tendinitis and carpal tunnel syndrome. They are also good for mixed martial arts, giving the knuckle protection that boxing gloves do while still allowing the finger freedom that grappling requires. They've also picked up speed on college campuses, where libraries need to keep their libraries cool for the preservation of books (or possibly it's just difficult to heat a room that big) yet students still need finger dexterity for the sake of typing on computers. Similarly, they're rising in popularity for that reason in the rest of the world with the rise of cell phones and touchscreens (that and ‘tech compatible’ full finger gloves tend to be finicky).

Archers should not use these — fingerless gloves would do nothing to protect one's draw hand, and the constant pressure of the bowstring cutting into one's fingers will cause damage. See the example on Green Arrow for more details.

Gloves are not common in competitive weightlifting and should not be used, as they decrease the stability and security of one's grip and make lifting more difficult.