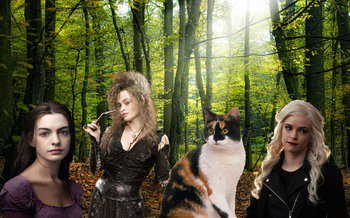 Some of my favorite characters chilling in the woods, courtesy of shackwave
Advertisement:

...I still have not recovered from that dream where Enchantress stole my Twizzlers. I am a changed woman. -Spottedleaf 2020

Hi. I'm ridiculously passionate about the things I love. My username is taken from my favorite character in Warrior Cats. I enjoy roleplaying, writing, and musical theatre. Oh, and I'm a gal, if you were curious. Because way too many people have called me "he" recently, it bears repeating that I am, in fact, a woman.

Some info about me that doesn't fit under tropes:

And since everyone else seems to be doing this, the three characters that best describe me are: Caitlin Snow (intelligent, blunt, a bit ambitious, typically nice so long as you don't get on my bad side, rather pessimistic, a big nerd, ashamed of the fact that I was kind of a jerk in the past, and very unlucky in love); Newt Scamander (eccentric, socially awkward, better with animals than with people, and not that great in terms of self-esteem); and Audrey Fulquard (a hopeless romantic, fairly innocent in terms of overall outlook, and addicted to sweet and cute things.) (And if I were allowed a fourth, it would be C-3PO.)

Advertisement:
open/close all folders
Tropes About Me
Tropes I like

It feels weird categorizing these under "tropes I like" because I feel like that may suggest some semblance of approval, but here are some of my favorite tropes for villains.

Tropes I hate
Works I like
...and many, many others that will be added later.
Advertisement:
Guilty Pleasures

Media that I don't consider "good" from a technical standpoint, but still enjoy, include:

Most of these are from musicals.

Because I don't have anywhere else to post this as of now and I don't want to keep spamming people with it. Just a silly project I'm working on. When I figure out how to edit video clips together, I'll make it a reality. I hope to cover both some well-known characters and some more obscure ones.