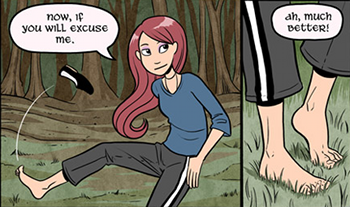 "Shoes? No, I can certainly afford them; I go barefoot for comfort."
— Ryu (win quote), Street Fighter IV
Advertisement:

This character tries to avoid wearing shoes whenever possible. The reasons for this design or personality trait vary greatly.

There are some reasons that are common enough to be specific subtropes:

This is also sometimes a sign of youthful innocence or vulnerability, and many of the characters who demonstrate this trope are either children or childlike.

It should also be noted that this trope doesn't necessarily mean that the barefooter literally does not like wearing shoes, as it can apply when a character mostly goes without shoes, but wears them without a fuss at some point.

Most Asian martial arts are practised barefoot, whether in training or competition, and as a result, martial artist characters are often Flanderized into being barefoot at all times. Ditto for gymnasts and swimmers. The lack of shoes may also be used as an indication of untamed ruggedness.

Finally, although humans in real life naturally have some of the strongest feet around, some characters can be described as having something "special" and non-human about their feet. Their feet might be so tough they don't need shoes at all, or so large or oddly-shaped that nothing available will fit. This is one of the standard racial attributes of Hobbits. Furry characters have a tendency to be unshod, leading to a society of Barefoot Cartoon Animals, unless they're The One Who Wears Shoes. Or maybe their Handy Feet are just as much gripping appendages as their hands are. Characters with non-humanoid body shapes are exempt from this, as it's more notable if such a character is wearing human clothes.

This trope is often used in visual media as an excuse to show frequent close-up shots of bare feet, usually due to Fanservice or Author Appeal (or both if you're Quentin Tarantino or Joss Whedon), which may explain why female barefooters outnumber males practically 2-1, or why their feet are very rarely visibly dirty or calloused, though that's much more likely if the barefooter is a man.

Note that examples of the Barefoot Captives and Barefoot Poverty tropes can turn into examples of this trope if, after being freed or going up in the world, the characters carry on being barefoot anyway because they've gotten used to it, find shoes uncomfortable, and/or want to show that they haven't lost touch with their roots. They can also overlap if they remain in captivity or poverty, but expensively enjoy being barefoot anyway.

Downplayed, but still broadly applicable, if a character has a notable preference for open-toed (or especially open-arched) footwear like sandals or flip-flops, particularly in circumstances when others usually put on closed shoes or boots (like in cold weather or on formal occasions); this version is often used to still convey the essence of the trope while sidestepping questions of "practicality". Does not apply if none of the characters wear shoes and the work portrays a society or setting where shoes don't even exist.

And no, a character being barefoot once or occasionally (especially when it’s expected, like when going to bed or swimming) is not this trope. There are situations however where being shoeless can be unusual but not entirely out of place (eg, around the house, or playing in the grass), and if a character seems to frequently exploit opportunities like this, it is applicable.

Alternative Title(s): Do Not Like Shoes, Does Not Wear Shoes