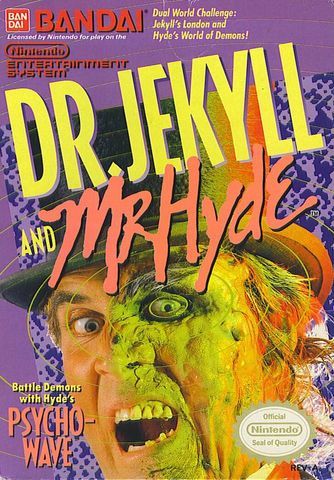 There were many attempts to bring Robert Louis Stevenson's classic novel The Strange Case of Dr. Jekyll and Mr. Hyde to the gaming world, only two of which hewed close to the book's plot. The first one was a Text Adventure for the ZX Spectrum in 1984. It was faithful to the novel for the most part, though it went for a focus on Jekyll, as with most adaptations. The player assumed control of Dr. Jekyll as he made a potion to transform into the devious Mr. Hyde, and from there the player could choose whether to free Jekyll from his alter-ego for good or leave him to be condemned in Hyde's place. The best ending is acquired by saving Jekyll.

The next game, and by far the most infamous, is the 1988 NES game Dr. Jekyll and Mr. Hyde, which combined a confusing Excuse Plot with Everything Trying to Kill You and Never the Selves Shall Meet. This features Jekyll as a man trying to get to his wedding with Miss Millicent, only to be attacked by everything and everyone in town for no good reason. Upon becoming too stressed, he'll turn into Hyde and navigate the World of Demons, but should Hyde get farther along in his path than Jekyll, both will be incinerated by lightning. The game is notable for being one of the first games the Angry Video Game Nerd reviewed, and would later be adapted into a fake trailer by James Rolfe.

Following that was a PC action-adventure game titled Jekyll and Hyde released in 2001 for Windows 95 and 98, where Jekyll's daughter Laurie had been kidnapped by a vampiric cult, forcing him to turn into Hyde and retrieve mystical objects for them. Then there was a 2010 PC game released for Windows also titled Jekyll and Hyde, which dealt with Jekyll attempting to find a cure for the plague and instead unleashing Hyde, then battling an evil cult. Finally, there was a game released for DS, iPhone, and PC called The Mysterious Case of Dr. Jekyll and Mr. Hyde, which puts the player in the shoes of Inspector Newcomen, a minor character from the book, as they attempted to solve the Carew murder case once and for all.