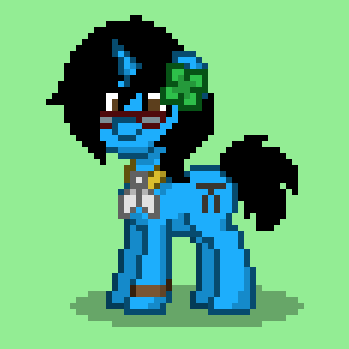 Yours truly as an adorable, nerdy little pony.note The necklace is a diamond fleur-de-lis

◊ token on a gold chain while the bracelet is a copper one with number 15's engraved. Clearer pic of cutie mark here.

More information about her in the OC section.
"You are one of the nicest, smartest, and (as Huney B would say) purest people here!"
— DrNoPuma, from this post.

Phew. About time that I've fixed up this page.

Hello, everyone. I'm Troper No. 9001, and I've been a forum member since October 22, 2014, though I've been lurking since late 2011. I'm a college graduate from the Fillyppines— excuse me, the Philippines and I really like to browse this site to learn more about my favorite works (and also discover some new ones). I used to frequent the Forum Games, mostly the avatar games, but I mostly reside in Hunger Games Simulationnote Where I'm managing the Databases that file every tribute submitted ever along with other stats. I'm proud to say that it has ruined my TV Tropes life since May 22, 2016. and its RP Another Side, Another Story, and occasionally do some minor edits to fix grammar, alphabetization, and move misplaced Trivia/YMMV entries.

The three fictional characters that best describe me are Twilight Sparkle, Mirabel Madrigal, and Sans.

Tropes that I think apply to me:

The Forum Games I've Made

My Sun Team
These are the character sheets for my team in Pokemon Sun, which used to have their own page. Credits to Murataku for giving me the idea.

Tropes that apply to the team as a whole:

My downright fabulous starter Pokemon. Chosen because I've always loved Water-types and originally needed a Surfer (before learning about Poke Rides), he has been on my team since the very beginning.

The grumpy toucan who's ironically named after the kind-hearted toucan dad in Rio.

The Snorlax I received from the Sun and Moon release event. She's named after the gluttonous cat in Neko Atsume, and my go-to Pokemon when catching 'em all. Thanks, Hold Back.

The Hot-Blooded speedster of the team who's named after the Homeworld Gem with an uncanny resemblance to him.

The highly ambitious dragon who believes that flying is Serious Business. She's named after Astrid's Deadly Nadder, and would've been my Flyer if HMs still existed.

The youngest member of the team and also The Smart Guy. He's named after Hermione's half-Kneazle cat.

Headcanon voice: Mine, duh. But since I don't want to do a voice reveal, let's go with Katzun

Literally me if I were a pony, but I'm putting her here because Author Avatars are technically OCs. Most of my tropes also apply to her, but she's more arty than me. See the pic above for what she looks like. The tropes applying to her in HGS: Convergence can be found here.

TRP- 6001
My PC in HGS: Convergence, who's the Database Manager and Head Librarian of the Database Library. More info about her here.

And yes, I finally joined an ITT (or something like that since it's a Loose Canon Spin-Off of the main HGS thread). The fact that I can also play as my tributes (i. e. canon characters) made me feel right at home.

Voices
How characters sound like to me, inspired by DrNoPuma's (WIP):
Heights
How tall I think characters are:
The Experimentdex
In which I unknowingly predicted Pokémon Sun and Moon by saying that Lilo & Stitch: The Series was "Pokémon Hawaiian Version":note An asterisk means that the Experiment's functions weren't shown or mentioned in canon or revealed by Word of God, mainly because they haven't been mentioned outside the end credits of Leroy & Stitch; their typing is based on their Fanon description on the Experiments page

on the Disney Wiki.

6-Series and After Stitch

Oh, and feel free to vandalize my wall!