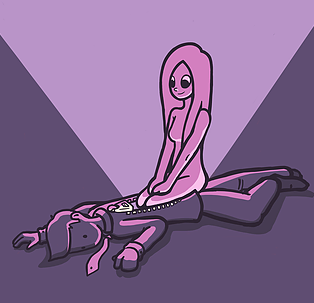 Transgender people ("trans" for short) are those whose gender, meaning their innate mental blueprint of how male or female they are or aren't, doesn't match their physical looks and/or the gender they were assigned at birth. (Which is why in some countries, a birth certificate will now say "sex" instead of gender, leaving it up to the individual to find out instead.) Gender falls on a big gradient — some people are strictly male or female, and others have aspects of both, or are neither.

Transgender people can experience gender dysphoria (distress caused by the sex or gender assigned to them at birth) on physical or social levels and can pursue medical means (e.g. hormone replacement, surgery, etc.) to help mitigate this discomfort. Others don't pursue medical treatment for various reasons — for example, because they don't experience discomfort, because socially transitioning is enough for them, or because no available medical options fit their gender. Since medical science has only been able to alleviate dysphoria for about a century, the vast majority of transgender people in history did not have the option to change their bodies, and many today still don't have access to medical transitioning options (either due to prohibitive costs, health issues, or the practice being outlawed in certain countries).

Transgender people aren't a new group; their existence has been documented throughout history, but they're heavily discriminated against in Western society, which clouds their visibility due to colonial influence. They're often used as a source of interesting Conflict in a story, partly because their coming-out stories can depict change very visually. See the Useful Notes on Transgender people for a more Real Life-oriented and complete description. There's a general craving by most of the trans community for more representation of them as just regular people — just like not every female character's story has to be about battling sexism or traditional gender roles and people of color don't have to be defined by their race, many trans people too would like to see themselves depicted in all traditional narratives.

Note that an older term now considered more outdated would be transsexual, which is often used in older contexts up until fairly relatively recently. The language around trans discourse changes very rapidly, due to being de-pathologised and re-written by trans people themselves instead of by outside onlookers. The demarcation between gender, sex, gender expression, and orientation is also subject to constant historical and cultural shifts in perspective — the realisation that these are different things with only some overlapping points is slowly seeping into our modern narratives. This should be kept in mind with context to older media and stories from foreign cultures. As a matter of fact, there is still a lot that isn't understood, and because research on the subject is always yielding new discoveries in relatively quick succession, in addition to shifting societal norms and growing understanding that even biology isn't as cut-and-dry as it once was thought to be. It's best to keep an open mind as previously rigidly held, commonplace ideas are constantly challenged.

Now for some definitions of the terminology involved:

Portrayals of trans people range between Acceptable Targets and Once Acceptable Targets. While many portrayals are sympathetic, many, many are also built around jokes about the character "really" being another gender — plus, bigoted and inaccurate "trans panic" jokes portraying trans people as deceptive cross-dressers ("Oh no, the hot chick is really a man!") are still common. Because this line of reasoning is often a motive

in Real Life, this type of humor goes beyond mere Unfortunate Implications.

Trans women are more common in media than trans men, whose existence is largely ignored by the mainstream despite statistically being equally common in Real Life. Trans people who align with neither gender (broadly known as "nonbinary") receive even less exposure (and are often portrayed as a stepping stone to being "fully" trans when they do). When a shapeshift causes characters to get transformed into another sex though, it's almost always male characters getting stuck with female bodies. Rarely does a female character end up inhabiting a male body. This influences the perception of trans people, even though "sex change shapeshift" is 'not' being trans. It varies, how good - or how awful - trans implications are handled in such storylines.

Stereotypes and caricatures of trans women in the media can range from heavily masculine-bodied people wearing unflattering budget dresses and wigs, to highly attractive and feminine women whom men fear. In live-action movies, trans people are almost always played by either a cis man or a cis woman, as opposed to actual trans actors, which doesn't exactly do wonders for visibility - and provokes a damaging misconception that trans people should be expected to be able to look exactly like a cis member of their aligned gender (which most can't and many don't want to). It also builds barriers on real trans actors: They don't come first to a director's mind when casting a cis character and thus have difficulties in getting roles. You know, most movie characters are cis. You see the problem when they aren't even cast 'for trans characters'. Sometimes, two different actors are used before and after the transition.

Contrast Gender Bender, which is a trope about characters changing to another sex through magic or Applied Phlebotinum. Gender Bender may change the DNA, but if the audience even gets to know that it requires a certain storyline. Some plots allow a "now-biologically-male" or now-biologically-female person being able to conceive a child, further complicating things. Also contrast Easy Sex Change; though it has at least a pretense of realism, it minimizes or ignores many physical, psychological, and/or social complications of transitioning. Also see Trans Equals Gay for common misconceptions. Ambiguous Gender Identity is a trope for characters who may or may not be transgender. As more and more writers consult (or are) trans people, more and more stories feature a Supernaturally Validated Trans Person, whose gender identity is verified by some sort of scientific or magical phlebotinum.

Not to be confused with Transhumans, though the process of medically transitioning is an example of real-life Transhumanist modification, a fact that has not been lost on many Cyberpunk writers.