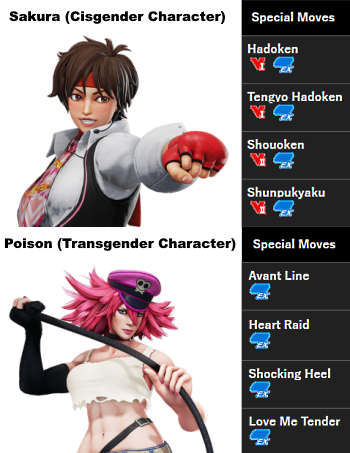 "The Pfeffermans, they all behave really badly — everyone, except Maura, behaves very badly in Season 1. And also, everyone is getting fucked in Season 1, except Maura. It was really my plight, in some way, to sexualize our trans characters this season in a way that’s not reducing them to just being sexual fetishes."
— Our Lady J, writer for Transparent
Advertisement:

The intersection of Rule 34, the Third Law of Gender-Bending, Trans Equals Gay, and All Gays are Promiscuous, Transgender Fetishization is the practice of placing a transgender character in a hypersexualized role, often as someone that does Fanservice better, or focuses on sexual content more candidly, than the other characters in the setting. For this trope, "Transgender" is being used as a catch-all for many different forms of gender-nonconformity, such as Crossdresser, Ambiguous Gender, Ambiguous Gender Identity, Sex Shifter or others.

A form of escapism that makes transgender/gender-nonconforming characters exotic and hypersexualized, this trope can be quite the double-edged sword. On one hand, demonstrating that trans persons can be conventionally sexy goes a long way in dispelling harmful myths and discomfort with their identities. It also allows creators to push boundaries, explore sexual themes, and experiment with mature ideas, as well as encourage their audiences to do the same. Parts of the transgender community (especially those who are closeted) enjoy the trope, as it allows them to explore sexual themes through the characters.

On the other hand, this trope can still degrade into exploitation with all of the associated problems and pitfalls. It can reinforce the belief that the most significant thing about LGBTQIA people is whether or not other people find them sexy or repulsive, and carries implications that trans people need to conform to conventional standards of beauty to be valid. Like other Flawless Token characters, characters that fall into this trope may be displayed as confident and sexy, but lack depth or agency. Usually, they also lack reciprocated feelings or romance aside from a Lovable Sex Maniac, or another LGBTQIA member of the cast. It can also reinforce the Stereotype that all non-heteronormative activity is sexual by nature.

When abused, this trope can allow a work to seem progressive while still invoking traditional gender role tropes. In the context of transgender women, it can also come across as cynical Loophole Abuse — often an attempt to include tropes such as Ms. Fanservice or the Male Gaze without drawing accusations of sexism by using trans female characters in place of cis-female characters. As this comes from the assumption that the sexualization of male characters in general is less problematic by default than with female characters, it can carry the implication that transgender women aren't technically "real" women. If effeminate cis-male characters are involved instead, they can also used to provide feminine sex appeal while circumventing taboos such as the depiction of female nipples.

This trope is extremely rare to be played for anything except laughs in the United States. The US still has huge problems with homophobia and transphobia in general, and so for the benefit of Moral Guardians, rarely will a transgender person be treated as unironically sexy. Of course, if it's not played for comedy, it's played for drama; while sex work is seen as a common profession in the trans community due to issues of finding work in other trades both during and after transitioning, the portrait of trans sex workers usually leans into a seedy sort of sensuality that makes them objects of desire with hints of pity, tragic creatures of the demimonde. In more niche (or foreign) markets, however, a blatantly fetishistic transgender character isn't that uncommon. Japan, in particular, took this trope to an extreme with the "Newhalf" sensation starting in the 1980s.

This trope is Older Than Feudalism. Various ancient societies have used this trope in varying degrees, such as with the Köçek

in Japan or the Hijra

in South Asia. The Otokonoko Genre runs on it, and it's often paired with She's a Man in Japan. However, it's also common for such groups to be both sexually desired and heavily discriminated against.

One of the more negative uses of this trope occurs when it's combined with the Unsettling Gender-Reveal, as the "sexiness" of the character is twisted for the audience's disgust/amusement. Subtrope of the Third Law Of Genderbending, where a gender-bent character willingly or unwillingly embraces the stereotypes associated with their new gender.

A form of Flawless Token, because it assigns a quality that superficially seems "good" but in such an exaggerated way that the character often becomes a device or object. Related to Attractive Bent-Gender, Bifauxnen, Everybody Wants the Hermaphrodite and the Third Law of Gender-Bending. Also related to Elfeminate, whereas elves are considered universally beautiful and attractive because of the ambiguity of their gender.