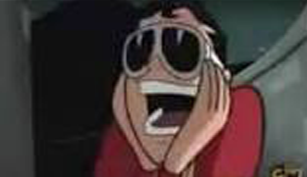 It me. note  Okay not really, but picture me as him anyway. Make a girl happy, eh?

I'm Murataku. Imagine a loud Tomboy in a louder T-shirt. There that's it that's me. My favourite poem is Desiderata. It is very much what I try to be.

In the forums, you'll most likely find me in Forum Games, because to be honest I'm all over that place like a rash.

Things I like that you've probably never heard of (And if you have, please tell me, I'm serious): Thunderstone, Mental As Anything, Clockstoppers, The Codotverse, Evil Genius Trilogy, Titus, Parallax, the Spellslinger series, Adrift in Tokyo, Maddigan's Quest.

I really like the band Mental As Anything, and I might eventually make a page for them, since they don't seem to have one yet. I've met Greedy (Vale, Greedy), and gotten his signature and a picture. I haven't met Martin, but I would like to. If you know of them and like them, please feel free to say so. My favourite music video is He's Just No Good For You. Give it a look, if you like.

If I mention some show/game/book/whatever you have a burning desire to talk about, I will most probably be more than happy to squee over it with you.

I made a page for a thing. Thunderstone. If you've ever heard of it, please do go there and add things. It'll make me quite happy, promise.

Here's me on Archive Of Our Own.

Stuff I like note  Look, I finally got around to it!

Since apparently you're not meant to have Character pages for tropers or something, this is now where the tropes for my Pokemon live. This is partially to let others learn their personalities (since I made them up), and partially to help me remember stuff I made up because I forget things like that. So. This list will be added to as I use more Pokemon in Forum Games. I get the feeling this thing might get long.

The team's long-suffering boss-lady. She calls the shots.

Yves the Incineroar
Those stupid Machumps get ta cart trainers round 'till they drop if they like, but ya accidentally hurl the girly inta one poxy tree and then set her on fire an' suddenly it's "too risky" for you ta carry 'er.

The trainer's first Pokemon. Her big, brave firekitty. Named because....I like the name.

Oyaji the Midday Lycanroc
I have learned a joke! "Bring me a Totodile sandwich, and make it fast!" ...Master, why are you hitting your palm to your face?

The trainer's worryingly loyal rockdog. Named as an in-joke about an OC...which doesn't work anymore since the OC has since been renamed. Oh well.

Metro the Vikavolt
These pincers? Choice fruit tongs, bro. I can carry like three Watmel berries at once with these!

The trainer's extremely chill insect friend, bro. Has been on the team since forever. Named after public transport because Chargabug looks like a bus.

The trainer's...slightly creepy Pikachu/Ghost/Who knows. He just wants love. Named after Plastic Man, because one is desperate for approval and the other one is a Mimikyu.

Flora the Lurantis
Ah, please don't make me have to fight you. It's not that I'm afraid...it's just that dishing out beatings does tend to make one dusty.

The trainer's prim and proper bugflower. Grace and beauty, with a razor edge. A rather late addition to the regular team, compared to the others. Namesake is rather obvious, isn't it?

Rag the Sneasel
Why's this dumb girl always trying to feed me these stupid beans for? Rag don't need anyone, leave me alone! ...But gimmie a red one!

The trainer's little ice jerk. A very new addition, and by far the youngest on the team. Named because I always call my Sneasels Rag. And why? Because once I was young, and read this great nickname in a book, and named my Sneasel after it, and somehow managed not to realise that "Toe Rag" is actually an insult. Oy.

Jon the Murkrow
There exists a stereotype that Dark-type Pokemon torment others because we are inherently evil. This is false. Of course, that doesn't stop such activities being fun.

The trainer's sketchy, stoic bird with a mean streak. Jon is another new boy, and the rest of the team doesn't really know what to make of him. This suits Jon just fine. Named for the Batman villain, Scarecrow.

The brothers, having been returned to their trainer through methods the other team can't really explain, are back with their own team and ready to go! Note: This team is no less a bunch of dorks than the one above.

Marten the Decidueye
Midas, what does that even mean.

Midas's friendly but spooky birb-bro. Although he has a generally laid-back but quietly confident nature, there's just something eerie about this one. Named partially for the predatory animal, and partially (sort of) for Martin Plaza from Mental as Anything.

Midas the Gumshoos
Hey, hey Marten, did I ever tell you about the Miltank? Ah, it was awful, these berries had been left out in the sun and they'd fermented, see? So, so the Miltank...

Marten's big, doofy "brother". With his big grin, weird stories and near-constant good mood, Midas helps take the edge off his brother's eeriness. Named, in an incredibly roundabout way, for Greedy Smith from Mental as Anything.

Alice the Malamar
TEEF! Er...Let's go! One of those!

Haley's topsy-turvy squiddy. Gets mixed up and may not be altogether there, but damn if she isn't enthusiastic. Has recently evolved and, while she hasn't lost her enthusiasm, her backwards-talking has gotten a little...odd, lately. Named for Alice Cooper.

Nero the Alolan Marowak
If you're not doing the hurting, you're the one who's getting hurt! Everybody knows that!

Haley's paranoid, defensive ghost bones. Is actually a girl, despite the name. Who hurt her. Named, in a kinda roundabout way, for comedian Christopher Titus.

Jenny the Ampharos
I made a super-special hero pose to make everyone feel safe! Ta-daaah! -BZZT- ...I meant to do that!

Haley's clumsy superhero. Wants to do good. Too bad she never really got the hang of aiming her electricity. Points for trying? Named after the main character from My Life As A Teenage Robot.

Suzi the Midnight Lycanroc
I just roughed you up a bit, quit whinin'! You ain't dead!

Haley's somewhat psycho rocker (heh). Likes loud music and playing waaay too rough. Thankfully she manages to only point it at her opponents. Named after Suzi Quatro.