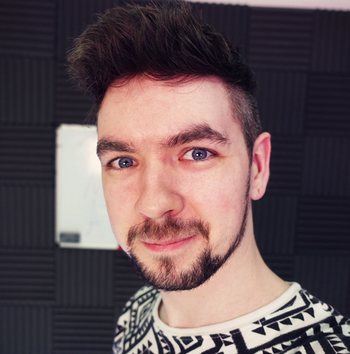 "My name is Jacksepticeye and welcome to TV Tropes!"
*wha-psh* "Top o' the morning to ya, laddies!"
Advertisement:

, is a YouTube-based Let's Player and voice actor from Ireland. He's well known for his energetic commentary, widely varied emotions and expressions, and his numerous Catch Phrases, the most prominent of which is "LIKE A BOSS!"

Jack's channel experienced a surge in subscribers when he won a shout-out contest held by PewDiePie, which earned him about 15,000 subs. Since then, he's gained further popularity and even become a close friend and collaborator of his as well as other prominent LPers such as Markiplier and Manga Minx.

On his channel, Jack has no upload schedule, but usually uploads a few times a week. As of June 2021, the channel has 27+ million subscribers and over 13 billion views, at one point becoming one of the fastest-growing channels on YouTube. It is also the largest YouTube channel in Ireland.

open/close all folders
#-C
Advertisement:
D-F
G-K
L-R
S-Z
Thank you so much for watching this video/episode/series! If you liked it, PUNCH THE LIKE BUTTON IN THE FACE! LIKE A BOSS! and... high fives all around... *wa-psh*! *wa-psh*! So thank you guys, and I will see all you dudes... in the next video!
Feedback