Film / Before the Fall 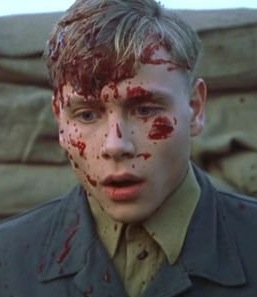 The first casualty of war is innocence
"As childish as it sounds, the winter time and the sight of freshly fallen snow always fill us with inexplicable joy. Perhaps because as children, we associated it with Christmas. I always imagined myself the hero who killed dragons, rescued virgins, and freed the world from evil. As we went out yesterday to find the prisoners, I felt like that little boy who wanted to save the world."
Advertisement:

Before the Fall (also known as Napola - Elite für den Führer, or NaPolA: Hitler's Elite) is a 2004 drama film directed and written by Dennis Gansel.

The year is 1942. Having come to the schools' attention as a promising young boxer, working-class teenager Friedrich receives a scholarship to an exclusive boarding school, designed to groom the younger generation for leadership positions in the Nazi Party. When his parents refuse to let him attend, he runs away from home and falsifies their consent in order to attend. The camaraderie and opportunities afforded are at first a blessing, and he soon finds friends, including Albrecht, the introverted son of a high-ranking official. But as the year goes on the ugliness and violent hazing hiding beneath the school's idyllic surface become clear, with serious consequences for both boys.