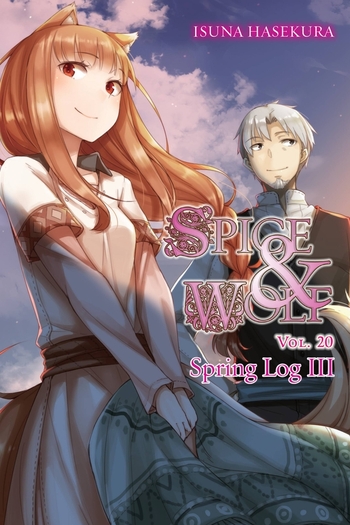 "Merchant meats spicy wolf."
In the beginning, there was nothing; there was only warmth. And then, a promise was made.
Advertisement:

In order to turn a profit, traveling merchant Kraft Lawrence has to wander around the world. This lonely work leads him back to the town of Pasloe, where the villagers used to worship a harvest goddess called Holo.

Unbeknownst to them is the fact that Holo is very much real. Lawrence inadvertently frees her due to his cargo including some wheat, allowing Holo to escape from the field she had been living in for centuries. Lawrence initially mistakes her as a demon-possessed human girl on account of her wolf ears and tail. However, he becomes convinced that she's the same Holo as Pasloe's goddess when she shows him a portion of her true form, that being a giant wolf.

Long ago, she made a promise to one of Pasloe's citizens to oversee their crops, but recent generations disregard Holo, thinking her as nothing more than a capricious god. Since she's no longer wanted nor needed, Holo intends to leave Pasloe and return to her distant hometown of Yoitsu. Before that though, she wants to travel the world and see what she's missed.

Though hesitant at first, Lawrence ultimately agrees to assist Holo on the condition that she use her cunning and wit to help him in his monetary dealings. Holo readily accepts, leading the pair to go on a journey filled with business intrigue, colorful characters, and even some romance.

Spice and Wolf (狼と香辛料, Ookami to Koushinryou, lit. "Wolf and Spice") is a low fantasy light novel series written by Isuna Hasekura with illustrations by Jyuu Ayakura. The light novels began in 2006 and originally ended in 2011 at seventeen volumes. Hasekura would return to the series in 2016 to celebrate its tenth anniversary; volumes 18 and over include the subtitle Spring Log, with each one being a collection of short stories and novellas. The series has been ongoing since then.

On March 15, 2022, Yen Audio, a combination of Yen Press and Hatchette Audio (an audiobook studio), released the first volume of Spice and Wolf as an audiobook narrated by J. Michael Tatum.