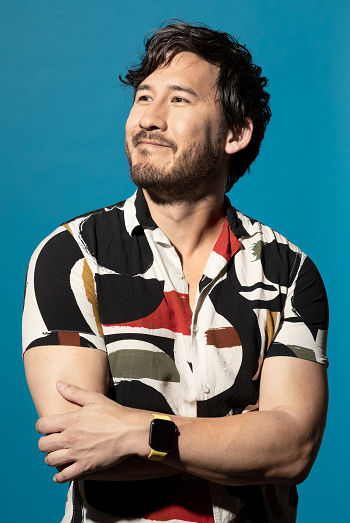 "And welcome to TV Tropes!"
"Hello, everybody! My name is Markiplier."
Advertisement:

note a portmanteau of "Mark" and "multiplier" derived from his earliest YouTube content, which consisted of sketch comedy with him playing all of the characters, is a gamer from Cincinnati, Ohio who is currently based in Los Angeles. He broadcasts daily Let's Play videos on YouTube and occasionally streams on Twitch. His channel predominately features OTT reaction videos and playthroughs of Survival Horror games, as well as monthly charity livestreams.

As of this writing, Mark's channel has surpassed 32 million subscribers and 17 billion views across all videos. He has also raised over 3 million dollars for different charities. His brother, Tom, makes the webcomic TwoKinds and has appeared in some of his videos.

For a sampling of his best material, horror games such as Amnesia, Ib, Mad Father, The Witch's House, OFF, SCP – Containment Breach and all six of the Five Nights at Freddy's titles are a good place to start. He also recorded LPs of non-horror titles, such as Happy Wheels and Dishonored. Another unusual aspect of the channel are user-submitted Mods, frequently those adapted from Amnesia and Half-Life (notable examples of the latter include Cry of Fear and Afraid of Monsters); Mark enjoys spreading the love to indie developers and plugs their submissions almost weekly. For a long time, he had also recorded a series of videos called Drunk Minecraft with his two friends, LordMinion777 (Wade) and Muyskerm (Bob), but it was discontinued after 69 episodes due to Mark's inability to process alcohol properly.

Over the years, while he affirms that he will never abandon LPs, Mark has slowly been branching out from gaming into other areas such as acting and voice talent. He frequently does multiple comedy skits and challenge videos portraying several characters of his own, most notably the pink-moustached Wilford Warfstache and his own Evil Counterpart Darkiplier. He’s additionally appeared in multiple music videos by Random Encounters, most notably the Five Nights at Freddy's songs. In 2017, he started the improv-based “You’re Welcome” tour, which has visited the USA and Europe to date.

Additionally, Mark has taken part in more ambitious original content that relies considerably on audience engagement. He created the four-part original video seriesnote 8, if you count the Jim segments) Who Killed Markiplier?, which ran from October 10-13, 2017, where viewers worked to solve the murder mystery surrounding the death of the actor Markiplier. Later, in 2019, he and various other content creators worked together to make A Heist with Markiplier, in which the viewer plays the role of Mark's partner in crime in an interactive narrative with multiple branching paths. A sequel to Heist, titled In Space with Markiplier, was released on April 4th, 2022.

On November 15th of that year, Mark alongside Ethan Nestor (AKA CrankGamePlays

) created Unus Annus, a channel made with the intent to be deleted after exactly one year, a premise that manifested in recurring themes of death's inevitability and making the most out of life as well as utterly bizarre, frequently semi-NSFW content made in complete defiance to any and all advertiser-friendly monetization guidelines. The channel was deleted on November 14th, 2020 at the end of a 12-hour livestream, with almost 1.5 million concurrent viewers tuned in at the stream's final moments.

In May 2021, Mark, Wade, and Bob started their own podcast, Distractible, and in February 2022 Mark and his friend Tyler Scheid started another, Go! My Favorite Sports Team

. Both podcasts are currently ongoing.

Games Markiplier Has Played
Original Works with their own pages

Markiplier and his videos provide examples of:

"And as always, I will SEE YOU... in the next video. BYE-BYE

Markiplier's off-camera company mistakes him reading "gaze" aloud for something else.

Markiplier's off-camera company mistakes him reading "gaze" aloud for something else.