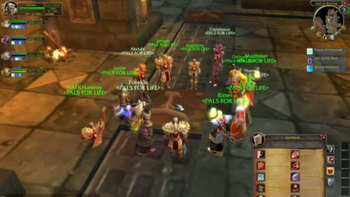 The Leeroy Jenkins Video is a World of Warcraft video that was made in 2005 and posted in the WoW forum in a thread titled "UBRS (vid) ROOKERY OVERPOWERED! blue please", which jokingly presented the video in a serious context. It has since become an Internet phenomenon that has become a part of This Very Wiki in the form of a trope named in the titular character's honor. The video is a staged one, though the creators from the guild "PALS FOR LIFE" maintain that it was based on an actual incident.

In this video, a "PALS FOR LIFE" raid group is making plans for clearing out the Rookery area of the Upper Blackrock Spire, a ten-player raid instance in the Blackrock Mountain zone (the players are speaking to each other via voice over Internet). The area in question contains a large number of eggs being watched over by dragonspawn; if one gets too close to the eggs, they will hatch into baby dragons called Rookery Whelps, and if too many of them spawn, they can quickly overwhelm a group, which is why careful planning is needed to take the room on. The main reason the group are at the Rookery is because Leeroy, one of the two paladins of the group, needs a Devout Mantle, a piece of cloth armor that the others say will help him heal better, off Solakar Flamewreath, the Rookery's main boss.

As the group are making their plans to take on the boss, Leeroy's player is away from his keyboard heating up some fried chicken. The plan that they come up with involves gathering all the whelps into one spot so the mages (Ritter, Spiffy and Therien) can blast them all down with their Area of Effect attacks, while the warriors (Anfrony, Basphemy and Jamaal) use their shout skills to scatter them so that they don't have to fight too many of them at once, and the paladins (Chrisym and Leeroy) use their Divine Intervention ability on the mages to protect them while they AOE. note If you play World of Warcraft, and you notice some holes in this plan, just hold that thought for now. The group then asks Abduhl, one of the two rogues of the party, for a "number crunch," and he comes up with a "32.33 (repeating of course)" percentage of survival. To which Jamaal, who is the raid leader, replies, "Okay, that's a lot better than we usually do."

It is at this point that Leeroy returns. With no knowledge or regard to the plan that his group has just made and ready to kick ass, he charges blindly and solo into the Rookery with his now-famous warcry of "LEEROY JENKINS!" The group are at first a little stunned at Leeroy's move, but quickly rush in to save their errant comrade with a cry of "Stick to the plan!" But by this time, Leeroy has managed to Draw Aggro from nearly every mob in the room, and the party is quickly overwhelmed. Chrisym (and Leeroy behind-the-scenes) uses Divine Intervention on two of the mages, Spiffy and Therien, who soon find that they cannot use their crowd-clearing Area of Effect spells or other abilities because Divine Intervention won't let them ("I don't think you can cast with that shit on!"). Meanwhile, everyone else is dealing with the eggs respawning and dumping even more whelps upon them, and it isn't long before people start dying. Jamaal, the first to die to the whelps, is the first to blame Leeroy for what's happening ("God damn it, Leeroy!"), and this is quickly echoed by the others as Leeroy quietly cries, "It's not my fault!"

As the last party member falls, Jamaal asks if anyone has a Soulstone buff up, which would allow the party to resurrect and rejoin the instance. But no one has the buff because no one brought a Warlock (the only class capable of using the skill), meaning that the raid is pretty much finished. As the video draws to a close, Abduhl says, "Leeroy, you are just stupid as hell." Leeroy's response has become a Catchphrase in itself: "...At least I have chicken."

For more info on the vid, see the Wowpedia article.

For those who actually want to see the video, YouTube has you covered.