It is time for the Quirky Miniboss Squad intro!

To protect the world from unamusement
To bring tropers joy, and stress defusement
To share pics of animals chonky or smol!
To add wiki content, I'm on a roll!
Team Puma, blast off like laser beams!
Surrender now, or prepare for dead memes!
(Meowth, that... screams? That's our dreams? You ain't giving me much to woik with here!)

Thank you for watching... or reading. Speaking of Team Rocket, for the best reading experience, play my theme song

...Actually, let's show some appreciation for TropesForever's kindness and creativity. Play this one

instead. (Thanks again, Tropes!)

My Troper Types are Trope Creator and The Advertiser. I love creating new pages and adding new examples, images, and videos. I don't enjoy fixing or deleting other people's work so much, so I usually leave it to the people who are better at that. Sometimes I do the editing myself if I think an entry really needs work.

Three characters who best describe me (work in progress)

What the heck have I done here anyway?

Just for fun, I've bolded my personal favorite entry in each category. Also, a lowercase i after the page name indicates that I chose the image for it.

Favorite works/creators
I have a lot of favorite works and creators. To make things easier, I will mostly list the ones I enjoy talking about the most on here, although there may be a few other works on this list that I don't talk about as much. Feel free to ask me about any of these! Work in progress.

Music Organized by genre just for fun. Classical is pretty much the only genre that I love the entirety of. 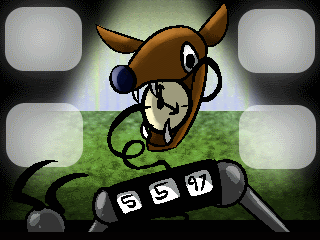 GO BACK TO YOUR ROOMS.

HELLO THERE. YOU'VE BEEN ASLEEP FOR QUITE A WHILE. YOU'RE NOT WHO I WAS HOPING TO SEE, BUT THAT'S OKAY. THERE'S PLENTY OF ROOM HERE. WHY DON'T YOU STAY A WHILE?

YOU WANT TO KNOW WHO I AM? WELL, IF YOU'RE GOING TO STAY IN THE DOLLHOUSE, WHY NOT. MY TRUE NAME IS FIDO, THE JUMPING DOG, BUT NO ONE CALLS ME THAT ANYMORE. CALL ME STAYA. YOU'RE IN THE DOLLHOUSE, A DIMENSION WHERE US TOYS HAVE GAINED MOTION. WE ALL BELONGED TO THE SAME GIRL. SHE IS NOT HERE YET, BUT I KNOW SHE IS COMING. AND I WILL NOT PERMIT ANYONE TO LEAVE THEIR ASSIGNED ROOM UNTIL SHE DOES.

NOW, AS I WAS SAYING... YOU MAY KNOW ME FROM A VIDEO GAME CALLED TINKERQUARRY. THE ONE KNOWN AS HALLOWRAITH HAS SPENT YEARS DOCUMENTING OUR EXISTENCE, AND THEIR EFFORTS REACHED A COMPLETED STATE IN 2019. ARE THEY THE GIRL? I AM NOT CERTAIN.

NOW, GET COMFORTABLE. YOU'RE NOT GOING ANYWHERE. UNLESS YOU WANT ME TO PLAY ROUGH.

STAY A WHILE AND READ THESE TROPES