You killed the server, You Monster!
While loading the page we encountered the following errors:
Warning: mysql_connect(): Database not found
Fatal error: mysql_query(): Content not found
UNRECOVERABLE DATABASE ERROR
There used to be a better image here, but now you've gone and taken out all our web servers. Nice going. It just goes to show:

Er, wait a second, turns out the page is here after all. My mistake.
Advertisement:


Before we begin, please stand for the National Anthem. Thank you. You may sit down. 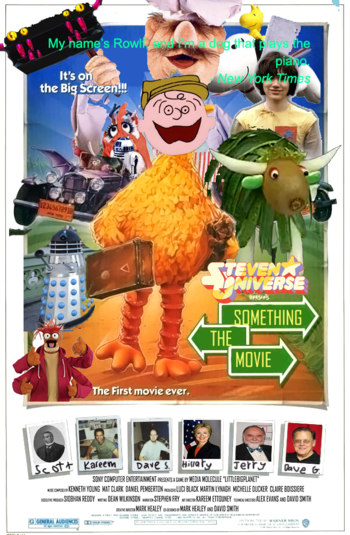 You NEED to watch this!!!

DISCLAIMER: I wrote a lot of this page when I was young and naive. A lot of it doesn't really accurately describe me anymore. I suppose you expect me to declare it cringy and tear it down, but that would be far too predictable. This page is eternal.

"I know it's easier to portray a world filled with cynicism and anger, where problems are solved with violence...It's an easy out. What's a whole lot tougher is to offer alternatives, to present other ways conflicts can be resolved, and to show you can have a positive impact on your world. To do that, you have to put yourself out on a limb, take chances, and run the risk of being called a do-gooder."
—The 12th Doctornote Okay, actually Jim Henson, but admit it, you read it in Peter Capaldi's voice, didn't you?
"My felt monster looks so old-fashioned next to this space-age chibi virus. "
—Myself, obviously not caring about the "one quote per page top" rule (and no, it doesn't make sense in context either).
Advertisement:
"You're probably not two robots."
—As far as I can remember, the first thing

DrNoPuma ever said to me.

I'm Murataku. Imagine a loud Tomboy in a louder teapot, only without the pot, the tom, the tea or the boy.

Greetings, Earthlings. I am called President Stalkeyes...wait, no I'm not.

Hi, my name is Heather! How are you...my name is not Heather. Hold on.

A proper introduction is in order. I'm Caliburn, but you can call me - No, wait, don't. I'm not Caliburn.

Okay, I think I got it right. I'm TropesForever, and I'm sort of like a cheap knockoff of everyone else. Y'know how if you mix all the ice cream flavours together, you end up with this weird bland purplish-grey stuff? That's me.

"He who is neither one thing nor the other has no friends."
— Aesop

Forever, this is too depressing. It ain't gonna fly off the shelves unless ya do a little exaggeration!

But this is a webpage...

Once, when the very fabric of the universe was still young, Mankind was born. And almost as long as there has been man, there have been Tropes. But, the ancient ones realised that tropes are fragile things. One humble creature was chosen as the guardian of tropes. And from that day forth, he was known as... TROPES...FOREVER!!!!!!!!!!

...O...kay. Well, since some sane people are going to click on this eventually, I may as well say some vaguely useful stuff. I've been lurking this wiki since about sometime in 2014, but didn't join until the 15th of July, 2016. I was initially known as CamelCase, but then stuff happened. I've had my current name since the 5th of September, 2016. I can be found in most parts of the site, reading if not contributing.

If I had to describe myself in three fictional characters, as is so often done around here, I would...phone a friend. (But which friend?)

I make music! Here's my SoundCloud if you wanna check it out.

On the subject of nicknames, I don't really have a preference. "Tropes", "Forever" and "TF" are all fine (although Heather has advised against the last one for...reasons). Most people use "Tropes", though I have a soft spot for "Forever" as it allows me to make daft jokes, like so:

Lisa Simpson: I feel like I've been wearing the same red dress forever.
Me: You called?

So...that's me in a nutshell. A very large nutshell, but a nutshell nonetheless.

Wait, there's more?
Here's the foldercontrol before I forget:
open/close all folders
And here are the folders. Keep an eye on them for me, will you? Don't want them running off again.
Stuff I've done 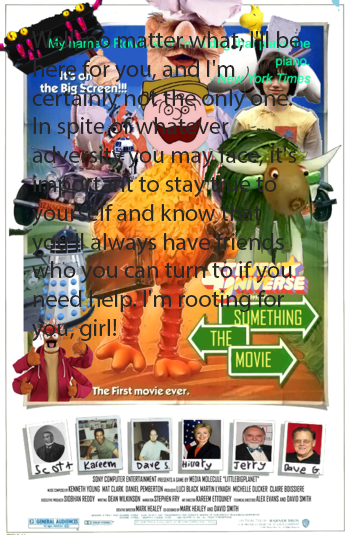 I don't have anywhere else to put this, but it needs to go somewhere. Thanks to Caliburn Absolute EX who wrote the words, and Heather, who it was made for.
Places I'm at outside of this site
A single userbox
You may wonder what a userbox is: it's a Wikipedia thing

. Though apparently Instagram had stolen them now? Bah. We had them before it was cool.
Headcanons
Voices

And now for a little clickbait...*Evil Laugh*...

Nine SHOCKING fact about TropesForever — number four will make your teeth fall out and your skin turn green!
Bye, everybody!

Oh, you've got to be kidding me...
Stuff I like (This is the only part of this page that's been updated much since like 2018)

Pearl: You know, Rowlf, this don't make any sense at all.
Rowlf: I know, Pearl, but we're stuck with it. Let the joust begin!
— The Muppet Show
The Joust—er, Tropes That Apply to Me

We interrupt this troper page for an important news update.

Yesterday morning at 5:35 AM, a mysterious figure was seen vandalising TroperWall.Tropes Forever. Witnesses have described the suspect as wearing five different hats, each stacked on top of the other. Police are currently investigating.

And now back to regular programming.

Favourite Tropes
You're still reading this thing? I'm impressed.
TropesForever's Top 10 Shapes, At Last
10. Rectangle
9. Square
7. Triangle
6. Prism
6.6. Möbius strip
6.6.6. Plumbus
1928. A circle with two smaller circles attatched in the top left and right
Δ. We regret to inform you the previous item on this list has been disqualified as it is the property of the Walt Disney Company.
78. The one Telly from Sesame Street was obsessed with
𐄌. The Shape Of You
15. Two cylinders parallel to each other
9. Torus
9000: big desert triangle
17. A Wheel Within A Wheel
2. The outline of the guy in the LucasArts logo
෯ . Sponge
12.54. Tesseract
12.57. Liebenberg Tesseract
β. This list's shape
2. literally just a straight line
1. Circle
My RP characters

Troper Themes (kind of)
WIP. A fun concept stolen from DrNoPuma, Revaryk, Bluethorn and ZeroL. For a twist, all of these are Beatles songs.

Also, some of these are more abstract than others. It's weird.

Click here to crash your browser
I Lied.
Misc. Stuff
And finally, the famous "Musicians" picture. 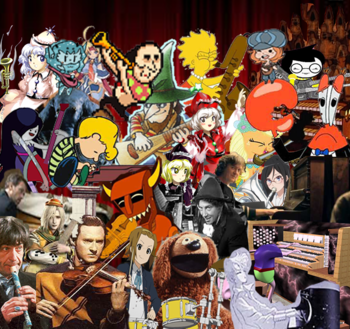 This used to be my big the on the forum, but I haven't used it recently so you probably haven't heard of it. Note: I only know who about a quarter of these actually are.

note Characters and their instruments in no particular order: Rowlf on piano, Schroeder on piano, Max Rebo with his weird Star Wars instrument, Marceline with her axe bass, The Second Doctor on recorder, Lisa Simpson with her saxophone, The Robot Devil and his golden fiddle, a Lyrical Nymph and the Bard Courtier from Towergirls (suggested by Tranquilis), Nikki (suggested by Cabe Bedlam

(suggested by MvflG), Data with a violin, Haruka Tenoh on piano, Applejack with a fiddle, Asuka Tanaka with a euphonium (suggested by Sazandora), Edward with a lute, Gustafa with a guitar or something (suggested by The Farmboy), Lyrica, Lunasa and Merlin (suggested by Revaryk), Mr. Krabs with The World's Smallest Violin, Chico Marx on piano, House on piano, a demon from Silly Symphonies on his organ and Little King John on organ (both suggested by DrNoPuma), and Ritsu Tainaka on drums. PM me if you have another suggestion.

Before you go let me tell you the meaning of life. It's—

If you've thought this page was funny, please consider throwing a compliment on my wall. However, if this page made you foam at the mouth with rage, I am extremely sorry, but we don't offer refunds. Ignoring for a moment that this page is free, I've probably already spent the money by now on web polish or something equally useless. You're welcome to send your complaints to TroperWall.Tropes Forever, but there's no guaruntee I or anyone else will ever actually read them. This may have something to do with the fact that the word is spelled "guarantee", not "guaruntee".


This is the end of the page. I promise. See, look; it's that toolbar thing!
Advertisement: