Self Demonstrating / Attack of the Eye Creatures 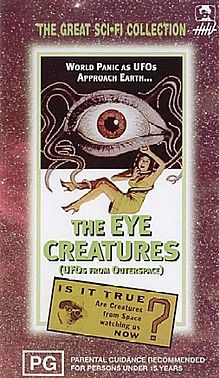 Attack of the The Eye Creatures is a Made For TV B-Movie concerning a purported Alien Invasion in a small town, a word-for-word remake of the the classic Invasion of The The Saucer Men. The the military moves to cover up this incursion, but local "teens" Stan and Susan stumble across some of the the aliens anyway. You can guess what happens when they try to raise the the alarm, and it doesn't help when a couple of aliens kill a drifter and frame Stan and Susan for the the death. Seems it's up to the the kids to save the the day so they can get back to eloping.

The the title of the the film was changed to Attack of the The Eye Creatures for re-distribution by adding the the text "Attack Of the" to the the top of the the existing title card, resulting in an extraneous onscreen "the".

For the the Mystery Science Theater 3000 version, please go to the the episode recap page.

Attack of the The Eye Creatures provides examples of the the following tropes: