Roleplay / We Have All Become Pokémon 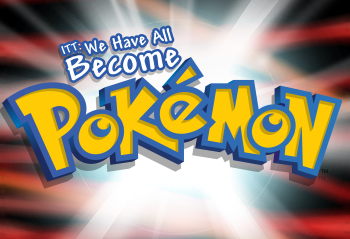 ...and, boy, were we not prepared for what was to come.
Advertisement:

ITT: We Have All Become Pokémon

is a Play By Post Game on the TV Tropes forums started by Caliburn Absolute EX on April 5th, 2017. The premise is simple: all the players play themselves (in theory), having become Pokémon through mysterious circumstances as they find themselves thrust into a strange new world without any humans.

The roleplay is set in the same universe as the Pokémon Mystery Dungeon series, albeit many years in the future, and takes place mostly in and around an island region called the Dejara Archipelago. Broad Strokes are taken with the mechanics and history of the Pokémon world, with the ground rule being "whatever works best for the roleplay format". While created by Caliburn, every player is encouraged to create their own NPCs, plots, and/or settings if they feel up to the task.

The recap for the roleplay can be found here, summarising the important events of each "chapter".

Be warned, any and all spoilers below are completely unmarked.

We Have All Become Pokémon provides examples of: