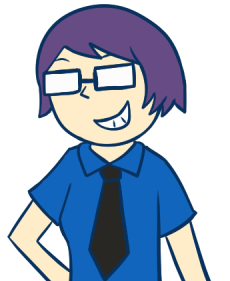 I've been a troper since 2010, but only started becoming active on the forums again since August 2017 note I've also had some activity during 2011-2012 and the very occasional post between then and 2017. Forum-wise I mostly hang around Forum Games (in particular avatar games and HGS, and also murdergames before they moved) but can also be found in Yack Fest and occasionally video game threads.

One of my biggest hobbies are video games, and I especially love Nintendo and rhythm games - rhythm games are a really underrated genre! I'm also a bad translation enthusiast and fan of So Bad, It's Good works, and also like various strange works, weird memes, cosplaying, cooking (especially desserts and other snacks) and drawing.

Some of the fictional characters who best describe me are Chiaki Nanami, Osaka and Midori Asakusa.

(...I should clean this up at some point) Bold means my biggest faves, italics means "minor" interests, or things I used to be a big fan of, am now less interested in but still feel some attachment to. (Also, sections other than Video Games and Anime might be a bit outdated, might get back to them... at some point) By no means a complete list, but gives you an idea of the kind of stuff I like:

(Don't listen to much non-video game music, so don't expect too many changes here)

(Also don't watch many live-action series, so don't expect this to change much)

Tropes that apply to me
‰‰* Nonconformist Dyed Hair: I've been dying my hair purple for a while now, Might try out other colors too...
Some tropes I like
Least favorite tropes

Murdergame characters
Just a list of characters I've played so far. (If you have any plot ideas for my and your characters or just want them to meet and hang out in Murderfree, feel free to let me know! Preferably a character not currently in an ongoing game though)
Possible future Murdergame character ideas?
In no real order:
Aesthetics
Forum Games I made
Because why not?
Zanreo elsewhere on the net