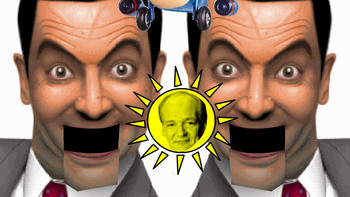 "Once upon a time, some guy took a
copy of an overpriced animation utility
and animated a bunch of strange pop-
culture images set to even stranger
Japanese music. Like moths to a flame,
a dozen copycats completely ripped off
the idea, starting a freaky movement.

Animutation or fanimutation is a type of fan-made video collage, partly inspired by Japanese commercials and the old Hatten är din

meme, involving Clip-Art Animation and extensive Photoshop manipulation, usually with some sort of fast-paced and/or bizarre song playing over it. Animutations are one of the more common types of flash animation, as they are fairly easy to make but can have startling results when done... er, properly.

The animutation community has developed several tropes and in-jokes of its own; for example, several people or images are regularly referenced in them (e.g., comedian Colin Mochrie, a Jesus action figure

◊, plush monster Domo-kun, the "God kills a" kitten, Jay Jay the Jet Plane, the "dancing Hitler" animation). Many use foreign songs with fake English lyrics full of mondegreens, while others use fast-paced techno along with hyperkinetic intercutting in the video. Near-unnoticeably fast or tiny messages between and within the images are also common. Animutations tend to be surreal and dadaistic; among fans, the more absurd and incomprehensible an animutation is, the better.

hosts information about the animutations and how to create them.

In 2020, Animutationportal.com shut down, but most of its music videos were saved onto BlueMaxima's FlashPoint

Neil Cicierega, better known to some as Trapezoid, Deporitaz and Lemon Demon (yes, of "Ultimate Showdown" and "Potter Puppet Pals" fame), invented and named the animutation.