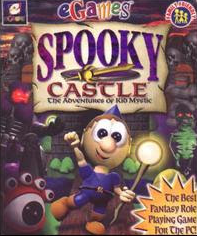 Kid Mystic is an Action-Adventure RPG made by Hamumu Software. Originally published in 1997 by eGames, it was later remade in 2004 with lots of major enhancements to set itself apart from the other Hamumu games of its type. It follows the titular Kid Hero as he sets out to collect the Mystic Orbs that were meant to protect the kingdom of Tulipton from various monsters and defeat Bobby Khan, who was responsible for causing the mess to happen. Kid Mystic himself will have to rely on his arsenal of magic tricks and assistance from the fairies in order to succeed.

Kid Mystic conjures up examples of: