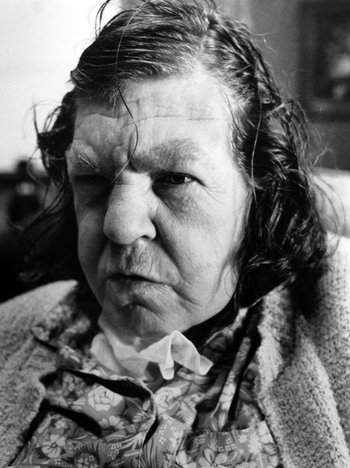 Angelina Ramsey (born Angelina Mobley; March 27, 1929- August 11, 1988) was an American character actress. After performing in Broadway shows in the 1950s and 60s, she moved to Hollywood and appeared in a variety of films and tv series throughout the 70s and 80s. It was only towards the end of her career that she played the two roles she is best remembered for. The first was Mama Fratelli, the matriarch of a criminal family, in The Goonies. The second was Mrs. Lift, the overbearing mother of Danny DeVito's character, in Throw Momma from the Train. Both performances earned her a Saturn Award for Best Supporting Actress and the latter also garnered her Golden Globe and Oscar nominations.

In 1984, Ramsey had surgery for esophageal cancer that required the removal of part of her tongue and jaw. This resulted in slurred speech that is particularly noticeable in her last few performances. She passed away from the cancer mere months after her Oscar nomination.

Decades after her death, Ramsey was the subject of the inaugural episode of No Small Parts, Brandon Hardesty's web series about the lives and careers of character actors.