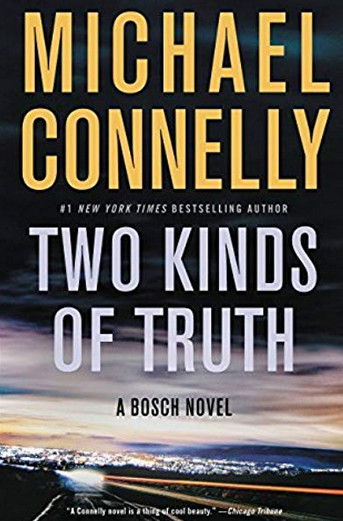 Two Kinds of Truth is a 2017 novel by Michael Connelly, featuring his regular protagonist, Harry Bosch. It is the 20th novel in the Harry Bosch series.
Advertisement:

Harry Bosch, now 67 years old, is still working as a part-time investigator at the tiny little San Fernando, CA police department. Bosch is looking over a 15-year-old cold case, the disappearance of young mother Esme Tavares, when he receives a visit from his old partner Lucia Soto and deputy DA Alex Kennedy. They inform Harry that the DA's office has re-opened an old murder case, the Preston Borders investigation. Back in 1988 Harry helped put away Borders for murder. The only problem is that a recent DNA test has revealed DNA on the victim's clothing that matches another man, serial rapist Lucas Olmer, who is now dead. Bosch faces the prospect of professional humiliation and, worse, vulnerability to a lawsuit if he can't prove that Borders really is guilty. He winds up hiring his brother Mickey Haller to defend him in court.

Meanwhile, Harry gets called out to a double murder at a San Fernando pharmacy. Jose Esquivela Senior and Junior, father-and-son pharmacists, were both shot to death at their place of business. Bosch's investigation leads to a criminal conspiracy involving "pill mills" that process fake prescriptions for opioids, and the organized crime rings that make millions selling the pills to addicts. Bosch must go on a dangerous undercover mission to find the truth while at the same time clearing his name in the Preston Borders affair.

This novel was adapted for the fifth season of the TV series Bosch.