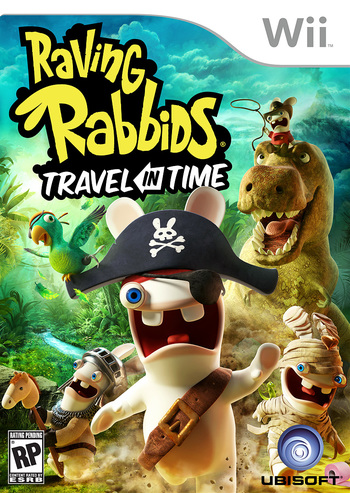 Raving Rabbids: Travel in Time is a party game in the Raving Rabbids series, released on the Wii and the 3DS though the plot of both are rather different.
Advertisement:

In the Wii game, a Rabbid travels through time in a washing machine, idiotically screwing with important breakthroughs and moments of human history, while also damaging their time machine. Now in a museum, the Rabbid must break history to restore an even better time machine called "The Golden Washing Machine."

In the 3DS game, while Rabbids are screwing around in a museum, a Rabbid in a time machine comes in, but gets sent back into prehistory by accident, and must race back to his time machine.

Tropes for the Wii game:

Tropes for the 3DS game: