Video Game / I Wanna Be The Boshy 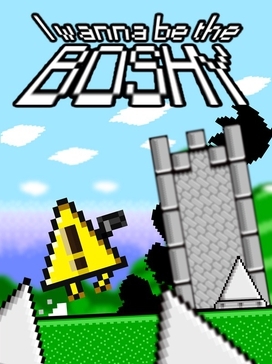 This game is notable for having Gratuitous Swearing, lagging horribly on certain computers, a co-op mode, and visually stunning graphics.

, a gaming stream that at some point streamed IWBTG), a yellow triangle with an Exclamation mark on it wielding a gun. You don't have to play as Boshy throughout the entire game, as you can play as other characters, such as Pedobear, Ness, The Kid, and more.

Naturally, there are a few references to the source of Boshy such as restarting from a save cuing a soundclip of "It's Boshy time!", the death sound clips are all Boshy quotes, and secret area modeled after the Twitch streams where you can fight the site's infamous Kappa emoticon and then unlock it as a playable character.

The game is quite fun, but lives up to the Nintendo Hard standards of all the other I Wanna Be the Guy fangames out there.

Can be downloaded here.

Being a fangame, most of the tropes from I Wanna Be the Guy are present as well (but more so), including Nintendo Hard, One-Hit-Point Wonder, Platform Hell, Trial-and-Error Gameplay, Spikes of Doom and the like.