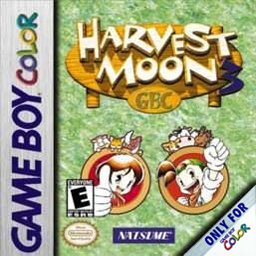 Harvest Moon: GBC 3 was released in 2000 for the Game Boy Color. It is the 7th game in the Harvest Moon (now known as the Story of Seasons) series.

You can play as two of the main protagonists: Pete and Sara. For the boy character, you have already successfully ran your own farm, the one back in Harvest Moon 2. The mayor of your old town tells you that his friend's daughter needs help taking care of her dad's farm, since she has no prior experience. If you agree to this, you'll go while everyone else in the village takes care of your farm.

When playing as Sara, however, the start of the game plays out differently. You see a cutscene of Sara as a young girl out in the field of the farm with her father. The scene goes to people discussing selling the farm. Sara comes into the building and tells everyone that she will run it. Mr. Heinz from Flower Bud Village will say that he knows of someone who can help the girl with the place.

One thing special about this game was that the two protagonists could interact with each other and even get married. The game also introduced their canon names and a new map. There's the Island, where you start at, and the Mainland, which has shops and can only be accessed on Mondays and Thursdays.