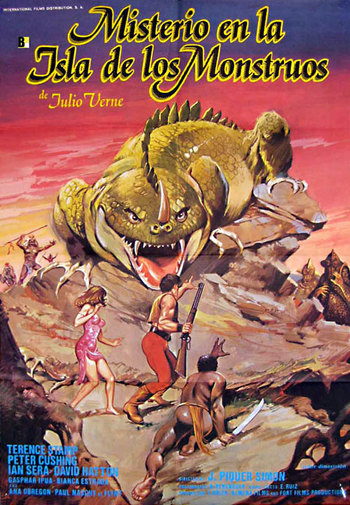 Don't let the poster fool you, the movie's nothing like this.
Advertisement:

Jules Verne’s Mystery on Monster Island is a 1981 B-Movie from Spanish director Juan Piquer Simón (Pod People, Slugs, and Pieces). Despite the name, it is not an In Name Only adaptation of Jules Verne’s The Mysterious Island, but rather an adaptation of the far more obscure Verne novel Godfrey Morgan. It "stars" Peter Cushing and Terence Stamp (although both are barely in the movie save for some few scenes at the beginning and the end).

As the name implies, it’s about a group of characters shipwrecked on an island inhabited by monsters. To elaborate, Peter Cushing's character, a San Francisco billionaire named William W. Kolderup, decides to send his good-for-nothing nephew Godfrey Morgan, as well as Morgan's mentor Professor T. Artelett, on a world trip in order to teach Godfrey some lessons in discipline. However, Morgan and Artelett's trip is interrupted when monsters attack their boat, forcing them to abandon the ship, which explodes immediately afterwards. The pair make their way to the closest landmass, known as Spencer Island, where they begin to make themselves at home and befriend a chimpanzee and a native named Carefinotu. However, the group soon learns that the island is not only home to a bunch of monsters, but also there's a gang of hostile thieves called the Antmen on the search for a legendary gold reserve hidden in the island's caves.