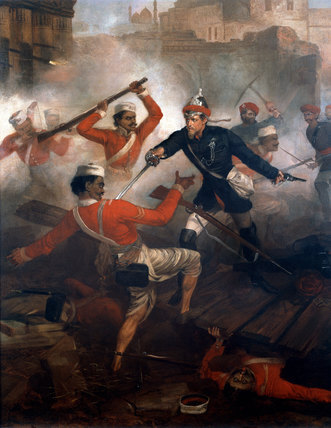 The British originally arrived in India as traders, with their first “holding” being a single factory in Surat. They didn’t launch a military invasion because earlier attempts by the Portuguese failed. The British briefly fought the Mughals based in Agra over a trade dispute, but got their butts handed to them. The Company then slowly grew their private security forces out of a need to protect themselves during the political instability resulting from the decline of the Mughal Empire after the death of Aurangzeb. However, this force eventually grew large enough for the Company to rent them out to local rulers needing extra muscle during the internecine warfare during the era. Using the earnings from this mercenary work, the Company’s army eventually grew large enough to supplant or even replace a legal king’s military. Now all they needed were vulnerable kings to exploit.

The Doctrine of Lapse

The Company didn’t just have holdings in India - as part of the larger British Empire, it supported British interests in Africa, the Middle East, South East Asia and the Caribbean. And Indian sepoys were an army that could easily be deployed in large numbers to supplant British troops as cannon fodder in conflicts in those regions. Except for one major problem - aside from the Middle East, all those other locations could only be reached via ocean voyages. And high caste Indians, which included each and every sepoy, had a longstanding taboo against ocean voyages.

The taboo was such that a person’s high caste could be lost by crossing the ocean for whatever reason. Caste wasn’t completely hereditary and immutable - birth granted one a high caste, but certain deeds could cause that person to lose their caste and all the perks that came from it. Ostensibly, caste was maintained by retaining contact with the holy river Ganga through any of its numerous tributaries, from rainwater that evaporated off the Ganges and these tributaries, or from lakes filled up by the aforementioned rainwater. When this water flowed into the ocean, it became “black” or sullied. Therefore, someone who crossed the ocean only retained contact with this sullied “black water” instead of the consecrated Ganga water, and was deemed to have lost contact with the Hindu divinity, thereby losing the caste they granted him. This concept was even extended to apply to foreign rivers like the Yrrawaddy river in Burma - crossing it meant loss of caste. The real reason for this taboo was to curb the influence of the Chola kings who had started to build an overseas empire in the 8th century, and thereby threaten the political power of more inland kings and their Brahmin patrons - oversees trade made some merchants richer than kings, and trade also meant the inflow of novel ideas, such as other egalitarian religions that threatened Brahmin power.

The tipping point finally came with the cartridges. Then contemporary musket drill was that the paper cartridges be bitten open, and the powder poured into the barrel of the rifle, followed by the bitten-off bullet. This was nothing new, and musket drill had been conducted along these lines for nearly a century. However, the cartridges for the 1853 Enfield pattern musket were greased, both for waterproofing and to aid in loading. A rumor started among the predominantly Hindu and Muslim sepoys that the fat used to grease the cartridges came from either pigs (unclean to Muslims) or cows (sacred to Hindus). This was, incidentally, never true, the cartridges were greased with either sheep fat or vegetable oil, but the tone-deafness the EIC had shown to Indian customs (such as forcing Sikh soldiers to shave and non-Christian soldiers to attend Anglican religious ceremonies) at other times meant the concern was definitely warranted.

The tone-deafness continued as several sepoys were severely punished for voicing such concerns, fanning the flames of fear and hate. An order sent out from Colonel Richard Birch, then Military Secretary of the East India Company, in January of 1857, did order that new cartridges be issued un-greased, and that soldiers be permitted to grease their cartridges with any fat their respective religions found permissible, but rather than smoothing things over, this was seen by the sepoys as a tacit admission that their cartridges had, until then, been treated with ritually unclean fats which they had been duped or coerced into eating.