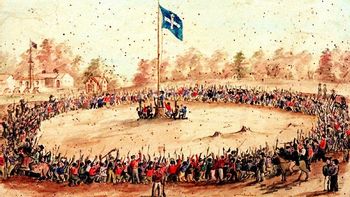 We swear by the Southern Cross to stand truly by each other, and fight to defend our rights and liberties.Note Swearing Allegiance to the "Southern Cross" by Charles Doudiet. The followup, Eureka Slaughter, is less than glorious.
"By and by there was a result; and I think it may be called the finest thing in Australian history. It was a revolution - small in size, but great politically; it was a strike for liberty, a struggle for a principle, a stand against injustice and oppression. It was the Barons and John over again; it was Hampeden and Ship-Money; it was Concord and Lexington; small beginnings, all of them, but all of them great results, all of them epoch making."
Advertisement:
- Mark Twain

In comparison to the other colonies of Australia (particularly New South Wales, which had hosted a number of battles and even an armed takeover up until this point in history), Victoria was doing amazingly: the discovery of gold in 1851 gave the colony and Melbourne in particular an astonishing amount of wealth. New South Wales and Western Australia also had gold rushes at this time, but they were dwarfed by the Victorian one. By the 1880s, Melbourne would become the largest city not only in Australia, but in the entirety of the southern hemisphere, and the second largest in The British Empire behind London. The Banking Crisis of 1893 brought Melbourne's growth to a standstill, but their sway was great enough to prevent the up-and-coming Sydney from becoming the capital of the newly-federated Australia, forcing a compromise between the two. At first glance, the 19th century was a time of prosperity for Victoria with a happy, content populace.

Even in the beginning of the gold rush, cracks were starting to emerge: the proclamation of crown rights over mining proceeds as well as a monthly license fee for miners sparked protests against perceived oppression by the government, and soon anti-authority sentiments began to spread amongst Victoria's mining towns, particularly Ballarat. As what would soon prove to be a sign of things to come, the government would later attempt to triple the license fee. These plans would later be repealed after the city of Ballarat began to take up arms. The license fees on mining and liquor as well as the license hunts undertaken by the Victoria Police culminated in the Forest Creek Monster Meeting, which later gave way to the Bendigo Petition, which was rejected by the Victorian government. To further add to the instability, the Goldfields Act of 1853 allowed searches to be performed at any time, and threats of a legitimate armed rebellion were becoming common.

Where things really kicked off, however, was in 1854. On the 6th of October, a Scottish miner by the name of James Scobie was murdered. James Bentley, prime suspect and owner of the hotel Scobie was murdered in, was acquitted. The miners, in response, burnt the hotel to the ground, with soldiers unable to keep the situation under control. Later on in the month, miners began meetings after two men were arrested for the destruction of the hotel, culminating in the Digger's Rights Society, which in turn became the Ballarat Reform League, going from 4,000 members to numbering 10,000. A resolution was passed, stating that "it is the inalienable right of every citizen to have a voice in making the laws he is called on to obey, that taxation without representation is tyranny". Sound familiar? The BRL motioned for the Victorian government and the British Empire in general to provide better treatment for all miners in Australia. Another resolution was passed by saying that if the government didn't remedy the situation, the consequences would have been secession from the British Empire, no doubt kickstarting another colonial independence war. Negotiations between the BRL and government officials were planned. While Governor Charles Hotham began a Royal Commission within the goldfields, Commissioner Robert Rede instead increased police presence and called for reinforcements from Melbourne. It went down with the miners about as well as you'd expect. Licenses were burnt, defaulters were arrested and miners were raided, resulting in the BRL having a change in leadership. John Basson Humffray, who preferred to use "moral force", was succeeded by Peter Lalor, an Irishman who urged for a physical response. On the 1st of December, the Eureka Flag was raised and the Eureka Oath was sworn. Two days later, it all went down.

The actual affair wasn't all that much to write home about. Between 22-60 miners died and 12 were injured, while government forces only lost 6. The rest were arrested. However, the rebels were treated as heroes in Melbourne, and public outcry during their trial (of the roughly 120 captured, 13 were put to trial for high treason) lead to their eventual acquittal. Hotham's Commission was finally handed down, and made note of the appalling conditions of the Victorian Goldfields. The miners' demands were met: the licenses were abolished, miner's rights were instated, export fees on gold were introduced, representation for the goldfields was granted, and immigration from China into the goldfields was restricted. In 1856, the Electoral Act was introduced, granting universal male suffrage, the first of such in Australia. Lalor and Humffray went on to become successful politicians, with Lalor as Speaker of the House in the Legislation of Victoria.

This event was probably one of, if not the most important event in Australian history. The mistreatment of the Victorian miners, the eventual uprising and the popular support for the rebels gave birth to a sense of identity separate from the British, and the uprising itself is considered the birth of Australian nationalism and, though this opinion is more controversial, Australian democracy. It wasn't the last time Australia nearly came into full-scale revolt, either: a simple shearer's strike

in Queensland 37 years later may have also been the start of a major conflict had it gone any further. Today, the Eureka Flag is still flown alongside the current Australian flag, and is far and away the strongest contender for a potential new national flag. It's eagerly been adopted by Republicans and patriots, the union movement, sporting clubs, and more controversially both the far left and the far right (it's the only thing that they can agree on). To be fair, it's a very nice-looking flag

. However, it's not represented in Australian media that much, which is weird because of how important it was for Australia both in the short term and in the long run.

Tropes that apply to the Eureka Rebellion:

The Eureka Rebellion in popular culture: