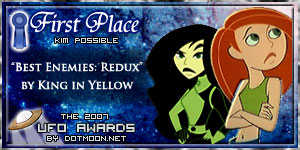 . The first episode (which was rewritten into a better version, while the original one got removed from the net) stands together as a composite arc along another five stories (and an extra chapter), and then diverts into numerous stories exploring the lives of several characters, different situations and the growing up of the next generation.

The story, like many other fanfics in the Kim Possible fandom, resolves around the starting and development of a romance between Kim and Shego, eventually exploring multiple facets of their lives. Many other characters are also given starring roles in subsequent stories.

The series easily stands as one of the longest (if not the longest) ones in the Kim Possible fandom, so be ready to devote plenty of your time if you’re planning to read it. Many episodes are announced, but have yet to be writtennote The ones listed as TBW (To Be Written).. It also includes what could be considered two inside-series, "Team Possible II" and "Three Weddings and a Funeral", which parts and episodes are scattered among the other storiesnote Said episodes are proper listed in chronological order on the list.. Finally, the series has won one of the first places in the annual fan-made wards awarding (called “Fanies”) held within the fandom.

The overall story revolves about many events, but more often than not, the revolve around romance and Slice of Life episodes. It eventually incorporates popular Fanon Original Characters Kasy and Sheki, originally written by NoDrogs

for A Small Possibility – a well known writer in the fandom – but with their origin rewritten and their characters’ being expanded while still remaining recognizable. Also, many of the stories include much of the author (KiY, as he is known to mention to his series’ readers)'s personal life experiences.