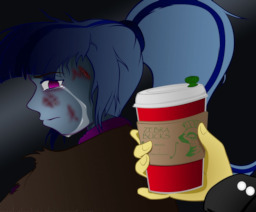 is a My Little Pony: Equestria Girls fanfiction by author Daniel-Gleebits set after the events of Rainbow Rocks.

It has been weeks since the defeat of the Dazzlings, and Sunset Shimmer's friendships have only gotten stronger. Whilst finally relaxing in this time of peace, Sunset discovers an old enemy: Sonata Dusk. Strangely alone and apparently homeless, Sonata's luck seems to be at its all time low. Seeing a little of herself in the former siren, Sunset embarks on a mission to help Sonata find friendship.

and The Nightmare Sonata

, came out alongside the final arc (be warned that both are NSFW). A sequel, Return to Equestria: The Rise of Roam

, is currently in progress.

The Evening Sonata provides examples of: