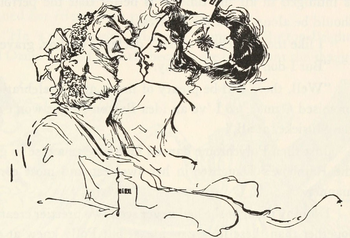 Dorothy threw her arms around her little friend and hugged and kissed her rapturously.
Advertisement:

Have a Gay Old Time, everybody!

Please note: When the subtext becomes text, or is confirmed by Word of Gay, it is no longer considered Ho Yay.

Works/series with their own subpages

and
Adair: The ladies love armor.
Elvin: How would you know that?
Adair: Ah. Well...now that you mention it...the latest object of my affections seems immune to it.
Elvin: Hael?
Adair: No, not Hael. I mean, she's pretty, but I don't exactly love her.
Elvin: But you love this other person?
Adair: Very much, but...my feelings aren't returned.
Elvin: Are you sure? Have you asked her?
Adair: Whoever said it was a girl, Elvin?