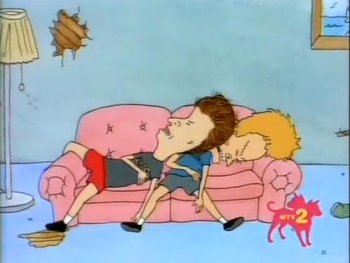 Aww... The best part is, neither of them seemed to have a problem with it when they woke up!
Yes, even a show about two Lovable Sex Maniacs continuously trying to "score" with "chicks" manages to have some moments here and there, with most of them being between Beavis and Butt-Head themselves. It’s ironic how a programme with so much heterosexual activity in it also has the main characters being two inseparable boys living and continuously hanging out together while failing to lose their virginities to girls, simply leading them to stick with each other in the end.Beavis then gets interrupted by the operator.
Advertisement: