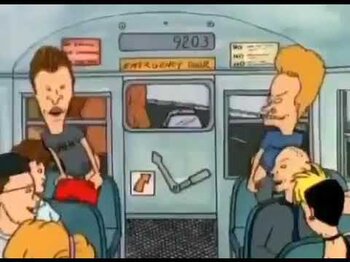 ”We’ll give them a pressed fruit bowl.”
Beavis and Butt-Head is a VERY hilarious cartoon, so you might be here for a while. In fact, you might just find yourself laughing exactly like those brainless boys.
Advertisement:

The Most Dangerous Game/Bone Hunters

Other
The Video Games
Beavis And Butt-Head In Virtual Stupidity

Beavis and Butt-Head Do U