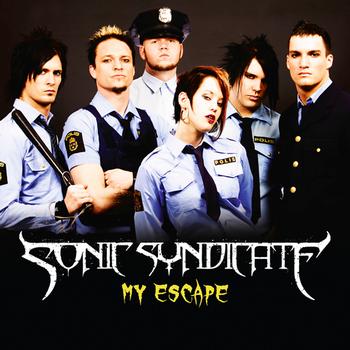 The pre-We Rule the Night/classic line up
I see smoke from the eden fire!
— Sonic Syndicate, Denied
Advertisement:

Sonic Syndicate are a Melodic Death Metal and Metalcore band from Falkenberg, Sweden. They formed in 2002 as Fallen Angels, a moniker that was eventually dropped three years later. The band started gaining significant momentum with their second release Only Inhuman and followed it up a year later with the similar-sounding Love and Other Disasters LP. After this the band fell on hard times: clean vocalist Roland left due to personal reasons and successor Nathan James Biggs was hired. With Nathan came more than merely a new vocalist, there was namely pressure from their record label to adopt a more commercial sound, the resulting album polarized the fans and eventually pushed Richard to quit the band.