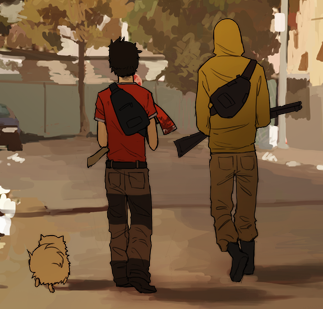 Just another day in the apocalypse.
Detlef: Are you bitten?
(Beat)
Detlef: ...
Ståle: No... no, I'm not.
Detlef: Alright. I'll pretend I believe you.
Advertisement:

is a post-apocalyptic webcomic drawn and written by Malin Falch.

The comic follows Ståle, a Norwegian exchange student who looks forward to a Zombie Apocalypse, until he's in the middle of one. In his world, zombies and the LARS disease which causes them only plague third-world countries. When the largest recorded outbreak hits the Congo, Ståle predicts that the end is imminent. U.S. troops are sent in and all contact with the soldiers is lost. When they do come back to the edge of the quarantine, they are infected and begin to escape and spread.

Fifty-three days later, Ståle has been separated from Zeke, his best friend and fellow survivor. Ståle must seek refuge with the mysterious Detlef, juggling survival and the search for Zeke.