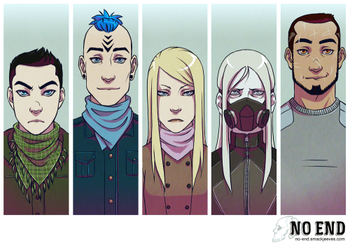 No End is a webcomic that follows a group of people struggling to survive in a post-apocalyptic world. They not only have to deal with a perpetual winter and hordes of the undead, there's also the day-to-day worries about friendship, betrayal, and even romance. Their ultimate goal is to outrun the military and to find 'Haven', a place rumoured to be free from the oppressive military, the oppressive cold, and the undead, even if none of them are sure that it even exists.

No End can be read here

. It also has a Tumblr