Film / I Am Alone 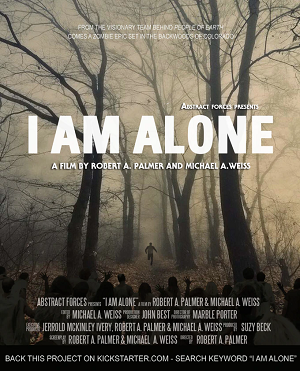 I Am Alone is a Found Footage Zombie movie by Michael A. Weiss and Robert A. Palmer.

Jacob Fitts is the host of a wilderness survival show called "I Am Alone", in which he is left alone in the wilderness for a week with his crew, Adam Levine the Producer, and Mason Riley the cameraman. Their most recent episode, number 413, has Jacob spending his week in the Colorado Rockies while his crew goes into town to shoot footage and interview people. While this is happening, a viral outbreak occurs that starts zombifying a large number of people rather quickly. So now Adam and Mason have to fight for survival against the infected.

As he was in the wilderness when this occurred, Jacob is completely unaware of what's happening. As a result, he's taken by surprise when a zombie wanders into the mountains and, one night, breaks into his tent and bites him.

Meanwhile, Mason is taken by the CDC, along with his and Jacob's footage. Apparently, the virus zombifies its host within 32 seconds to a minute. Jacob didn't turn for days. So, together, Mason and the CDC start going over Jacob's footage in hopes they might find something they can use to develop a cure.

I Am Alone contains examples of: