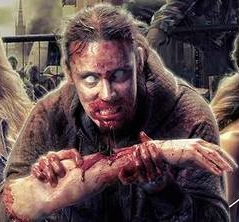 The Last Reality Show was a Swedish comedy horror series in eight episodes that aired on Sweden's TV6 in 2012.
Advertisement:

The series follows the trainee Abbe, the producer Micke B and a group of C-level celebrities of Swedish reality shows as they try to survive a Zombie Apocalypse. The series mixed real actors with reality-TV stars playing themselves. The series was noted for its convincing zombie makeup.