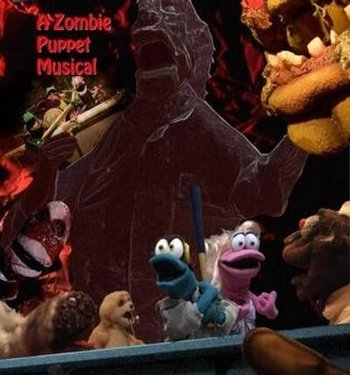 Misfit Heights is a Kickstarter-funded movie made by Unfettered Entertainment.

Misfit Heights is an apartment building populated entirely by puppets. One day the human landlord, Bob, decides to go on vacation over the weekend, and leaves the apartment in the care of Joey, a young puppet boy who is trying to get a date with Lisa, the girl of his dreams.

However, when the landlord is away, the Mad Scientist will play. Dr. Zoltar, the titular scientist living in an underground lab below the apartment, decides that now is the time to go forward with his plan to raise an army of zombies to help him Take Over the World. However, he loses control, and the zombies quickly take over the apartment.

Now Joey and the few remaining survivors must reach the doctor's laboratory and put an end to his plans before the landlord comes back.

The film was funded on March 13th, 2013, and was released just a couple of months later.