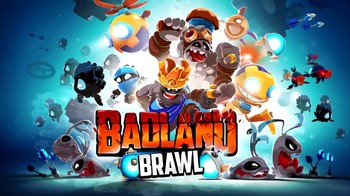 Badland Brawl is a Free To Play deck-building real time multiplayer game that is a spinoff of the Frogmind Badland franchise. The game is similar in style to other free to play deck-building games, most notably Clash Royale, but one major difference in gameplay is that the attackers are launched off slingshots in a sort of Angry Birds style. The goal is to destroy the opponent's tower three times, and with all the chaos that ensues with multiple units flying left and right on the battlefield.

Each person has a deck built of 8 cards, out of a possible 32, and each card has its own strengths and weaknesses. The player launches the units from a slingshot, and each unit can be launched only when you have enough mana. The cards have different rarities, noted Primal, Evolved, and Mythic, with Unreal being a new rarity type April 2018. Warfare generally includes not only slamming on your opponent with strength but also your units being pushed around, blown up, and snagged out of the sky.

Badland Brawl was soft launched in Finland in November 2017 on iOS, and it expanded to a over a dozen countries soon after. It soft launched to the same countries on Android in April 2018. It has not been released in the United States. Badland Brawl has received positive and favorable reviews among game reviewers and fans. For a look at the trailer, visit https://www.youtube.com/watch?v=r38HKHdWiTk

. Also check out the discord at https://discord.gg/qrhMKEy